ALEXANDRINA MILCHEVA – THE BRILLIANCE OF PERFECTION 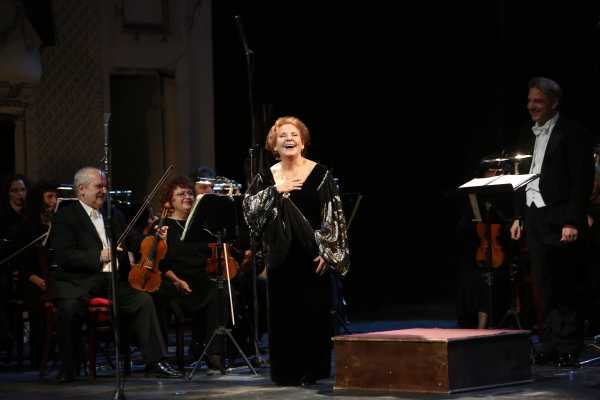 “Let’s hope it’ll be repeated!” – this was the most often pronounced phrase after the end of the amazing benefice, which the prima of the Bulgarian and the world opera stage Alexandrina Milcheva created together with her students at the stage of the Sofia Opera and ballet. With her perfect interpretations, not subordinate to time, as well as with the achievements of each one of the other participants – her students, the star left literally without breath the audience, which had come to pay respect to the event. This time again she defended her place among the greatest world mezzo-sopranos, which she has been holding since decades with dignity and unique professionalism.

The joint initiative of the State Opera Plovdiv and our first opera theatre turned into a wonderful example for the way in which have to be honoured our great names from the second half of the ХХth century in the art, determined by the spectators of the Bulgarian National Television to be the greatest achievement of Bulgaria of the past century. Thanks to the direct broadcasting of the benefice by the Bulgarian National Radio, an audience of thousands had the possibility to enjoy in life the highest class art, shown by Milcheva and her students.

The concert program, arranged with exceptional taste and elegance, was defended in a magnificent way by the soloists, the orchestra of the Plovdiv Opera and the chorus of the Sofia Opera with conductor maestro Luciano di Martino. From Händel, through Mozart and Rossini, up to Wagner, Verdi, Puccini, Gounod and Massenet. Together with her students Alek Avedisyan, Violeta Radomirska, Evgenia Ralcheva and Ivaylo Mihaylov with arias, duets and tercets the famous mezzo-soprano sculpted a colourful pallette of classical and less known characters. Completely according to the expectations, Milcheva was glancing with the splendour of a real maestra, with which she is famous since decades on the world opera stages. Her high class she defended with the aria of Charlotte from “Werther” by Massenet, the duet of Azucena and Manrico from “Il trovatore“ by Verdi and with the beautiful point of the concert – the turned out to be her trademark aria of Princess de Bouillon from “Adriana Lecouvreur” by Cilea.

We won’t be wrong, if we determine what we have seen as a concert of one of the numerous, conditionally said, master classes of the prima, known since years as wonderful pedagogue. Not by chance in his greeting to the great opera singer the President Rosen Plevneliev marked that “only the really great artists realize the power of the art to outlive everything, when we transmit our love for it to those, who are coming after us!”

The Director of the Sofia Opera Plamen Kartaloff called the benefice “a real pearl in the crown of the 125-year old history of the opera tradition in Bulgaria“. Our first opera theatre declared Alexandrina Milcheva for its honorary member in the Theatres night in 2014. Then she held a 2-hour open lesson, about which people don’t stop talking with admiration and enthusiasm not only in the musical circles.

For her achievements as performer and pedagogue Alexandrina Milcheva was awarded by the Ministry of Culture the distinction “Golden Century – Star”, which was handed to her by Mrs. Elianka Mihaylova, Director of the Stage Arts Direction. The stage was full of flowers from colleagues and admirers of the opera prima. She received many greeting addresses, among which from the opera theatres in Varna, Ruse and Stara Zagora, from the Angel Manolov Academic chorus, as well as from the led by her own Young Bulgarian Talents Foundation.

Orchestra of the State Opera – Plovdiv

Chorus of the Sofia Opera

Verdi – “La traviata” – Chorus of the matadors and the gipsies – Chorus

View the embedded image gallery online at:
https://www.operasofia.bg/novini/item/2599-aleksandrina-milcheva-blyasakat-na-savarshenstvoto#sigProGalleriae96ca20221
Снимки: SVETOSLAV NIKOLOV
Вижте още: « The classic Acad. Vasil Kazandzhiev: I don’t know what kind of messenger of God could save us?... 6 December – guest-performance of VESSELINA VASSILEVA in the role of Violetta from Verdi‘s "La Traviata" »
нагоре