Why Masha Ilieva doesn’t smile and analyse, but criticizes

In the beginning, 25 years ago, Masha Ilieva didn’t know from where to start the training of the children, but today her pupils dance on many stages

25 years ago, when the prima ballerina Masha Ilieva decided to have her private school, she didn’t imagine that she would do this the next whole 25 years. And that she would be hardly aware that they have elapsed. Nor that the school during this quarter of a century would win recognition as one of the biggest and most successful in the country.

“Till now I am even not fully aware that 25 years have passed. This is terribly so much! And then I didn’t make any plans. My situation was hard, I didn’t have work. I was even thinking that I could become a waitress”, frank is today the prima ballerina.

Masha didn’t suppose something else too – that at the jubilee performance at the Sofia Opera and Ballet the hall would look unusually – without half of the rows, with enormous distance between the stage and the spectators. And that for the 100 children, dancing at the 25th Anniversary, there won’t be enough place on the stage for the bow. Instead of them appeared Masha’s team, which the infection forced to teach remotely and in these 100 families, months in succession ballet was danced. Not only by the children.

“Excuse me for the reprimands, but I love you”, said Masha quietly at the end of the spectacle and she asked pardon.

In principle, she never spares the criticism in the work towards the ballerinas from the National Ballet, nor towards the children in her school. 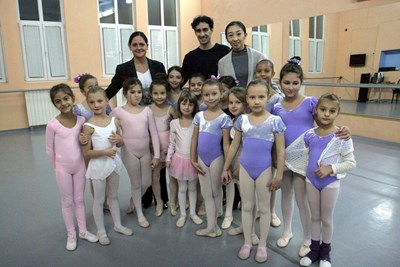 25 years ago, Masha Ilieva was not fully aware that her ballet school would be so long-lived and successful.

“Usually, people say that the moto of the Virgos is “I analyse”, but I have transformed it into “I criticize”. This is the Russian way of working – a pedagogue always shows the mistakes of her pupils and praises them just from time to time. I know that I have to praise them and smile, but by me criticism prevails. It is hardly surprising that I am making someone to become discouraged, but what can I do – I know nothing else. I was thought this way, even my mother, who wasn’t ballerina, had always showed me criticism after a spectacle”, shared she.

In the middle of the 90-s, the situation of Masha Ilieva on the ballet stage could be estimated in different ways. There was no question someone to dismiss her from the Sofia Opera, but the situation of the entire company was exceptionally hard. The spectacles were few, the audience didn’t enter the hall and it was happening to Masha to appear in a lead role only twice in the year, and this is equal to death sentence for every ballerina in her prime.

“Initially, I was not fully aware what I was undertaking. I thought to make some kind of a school for plastics and ballet, but in the 90-s everything was disintegrating. I went to the Lilyana Dimitrova House of Culture, which was just renamed in “Sredets”, and there a colleague, who had school for folk dances, proposed me to make a school for classic ballet”, told Masha.

The bad thing was that when she took her stand before the children, she realized that despite of the solid school, through which she had passed in Russia, to teach especially little children, was far not so easy. 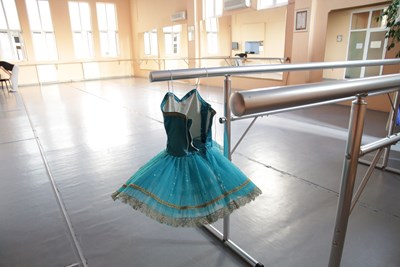 Masha Ilieva has a doctor’s degree in Methodology of Ballet Training for Children from 3 to 7-years old.

“I went to CSKA to ask the trainers in rhythmic gymnastics what they were doing with the littlest children. It is very responsible and frankly I was afraid”, admitted she. Which didn’t bother her years later to write a doctoral thesis in methodology of ballet teaching, in which the basis is the anatomical development of the children between the age of 3 and 7.

But it happened so that everything or almost everything she discovered in the practice. She didn’t know, for example, that until the age of 5 children don’t have a developed peripheral vision. And she was wandering why she cannot make them watch the legs of their mates and walk in step with them. And dozens of things more, which she was forced to discover by herself.

Many children, who were visiting Masha’s school in the beginning, have continued until now and this is why she had to organize courses for adult lovers.

In principle, ballet is a cruel art and in practice quite few are those, who would be able to dedicate themselves to it. The lack of well-trained ballerinas especially in classic ballet is omnipresent, because not more than 1-2 children of each 50-60, at that in the best case, show real qualities or have the character to become professionals.

And in this aspect Masha succeeded. At the moment there are 3 ballerinas in the company of the Sofia Opera and Ballet, who were visiting her school as children, and after that they have graduated from the National School of Dance Art, where the enrolment is after 4th class. These are Ralitsa Ilieva, Elena Petrova and Martina Sergieva.

She has also two pupils, who reached London’s Covent Garden and Vienna.

But the school is just one part of Masha Ilieva’s activity. Few people suspect that she had 40 years constant work at the Opera, where until this day she has been a repetiteur. This is the person, who prepares the ballet artists in principle or for the concrete performance and role, as well as the person, who has the decisive word in the company who which role will receive. The repetiteur’s work is very responsible, because the ballet dancer, even if of genius, cannot see himself how does he look from aside and what exactly he does. 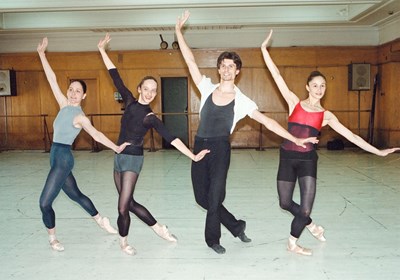 Rehearsal moment in the past. From left to the right: Masha Ilieva, Dilyana Nikiforova, Rosen Kanev and Darina Bedeva.

At the moment, Masha has several rehearsals of 3-4 hours per day for “The Nutcracker”, the performances of which will be near the end of February. This is a complicated spectacle, with a lot of scenes, with complex ensembles, in which the same artists appear in several roles.

Masha Ilieva works simultaneously with the corps-de-ballet, with soloists and premier soloists. She assists the preparation of many of the roles of the prima ballerinas Katerina Petrova and Boryana Petrova, of the soloists Kristina Chochanova and Venera Hristova and others.