The director Vera Nemirova before FAKTI: "Ariadne auf Naxos" is an opera pearl in which you discover something from our world and from yourself"

I am inspired by Ariadne's path from darkness to the light, love and new life. This is the brightest message that is transmitted through music from the creators to the spectator.

The spectacle is dedicated to the 80th anniversary of one of the greatest divas in the world – the Bulgarian Anna Tomowa-Sintow, who throughout the summer of 2021 was preparing the singers for the upcoming premiere. 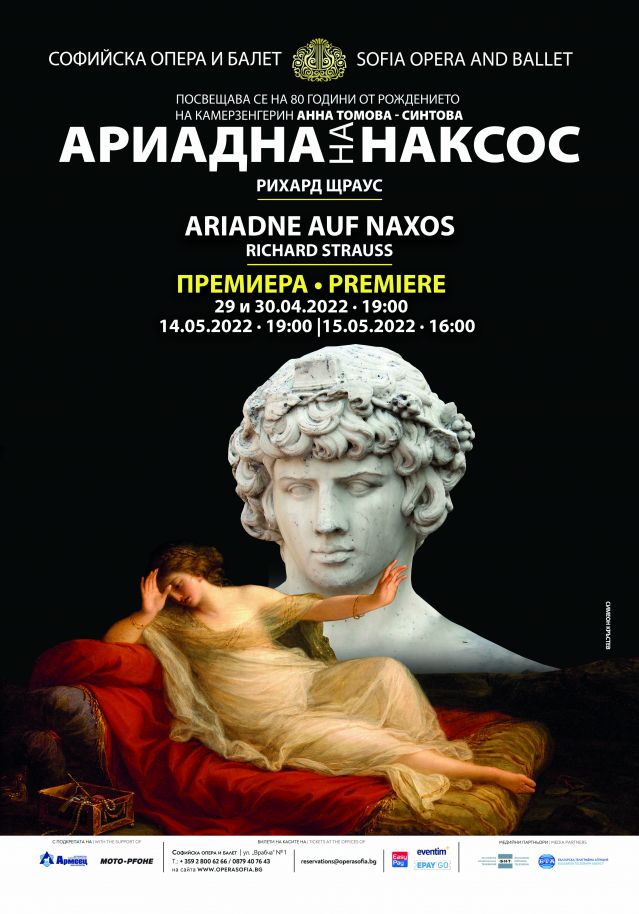 - Mrs. Nemirova, why did you accept the challenge to direct the opera “Ariadne auf Naxos”?

- I gladly accepted the invitation of Academician Kartaloff to stage for the first time at the Sofia Opera "Ariadne auf Naxos" by Richard Strauss, because it has been my favourite opera since I was a teenager and I was just waiting for this opportunity.

- The spectacle is dedicated to the 80th anniversary of one of the greatest divas in the world – the Bulgarian Anna Tomowa-Sintow. What would you add to this prestigious dedication?

- I wish our wonderful Anna Tomowa-Sintow all the best on the occasion of her anniversary. I am proud that I had the chance to get in touch with her creative personality and work in a team with her.

With this production, I personally

commemorate the memory of my mother,

the opera prima Sonya Nemirova, who debuted in 1989 in Rostock, East Germany, as Ariadne. I have adored this work ever since. In recent years, we have worked with her as a creative tandem, and the scenography and costume project was our last collaboration, which we presented together at a technical conference a year ago at the Sofia National Opera. She passed away in August 2021. I dedicate my production to the memory of my mother.

- What inspires you in this work by Richard Strauss?

- I am inspired by Ariadne's path from darkness to light.

Abandoned by Theseus on a deserted island, she awaits the messenger of death, but instead comes Bacchus and with him love and new life. This is the brightest message that is transmitted through music from the creators to the spectator.

- Aren't you worried that the opera has never been staged in Sofia and the work itself seems to have been forgotten among others by the same author?

- On the contrary, this is what motivates me, and besides me, the whole team of musicians and soloists, as well as technical services of our National Institute. We are proud of the conductor Evan Christ that we are the first artistic team to give Sofia this title, 111 years after its creation.

- What will your directing show innovatively?

- I am a graduate of the German school, the so-called music theatre. This means that we are working very conceptually and especially on the acting of the singer-artist. I am already successfully introducing these tendencies in our country, most recently with "The Queen of Spades" in Varna, "L’Africaine" by Meyerbeer in Stara Zagora (a spectacle of mine from Deutsche Oper Berlin, which I brought here), and now with "Ariadne auf Naxos" in Sofia.

- You say that two worlds come together in “Ariadne auf Naxos”. Which ones? What exactly do you mean?

- In "Ariadne" there is tragedy and comedy, theatre in the theatre and real action in the prologue. The work ingeniously intertwines the genres and stories of two different troupes: classical opera singers and comedians, who by order of the rich patron are forced to act simultaneously.

- Which moment of the opera is your favourite and why? What exactly is reflected in it?

- I have countless favourite moments, and I envy every spectator who will see "Ariadne" for the first time.

- How will the plot and the music itself grab the audience?

- The music is magical, the action both comic and deep. As in any good comedy there is a little sadness, so in the darkest moments of the tragedy a cheerful bright ray of hope creeps in. With the current topic of the dependence of the arts on money, I think we will hit the centre of our difficult daily lives. And with the captivating vocal and artistic abilities of our star ensemble in two wonderful casts!

- What are your expectations from the spectacle?

- I wish the spectator to like and fall in love with this title and I wish it a long life not only in Sofia, but also on other stages in our country.

- Which will be the next spectacle you will direct?

- Next is “The Little Cunning Vixen” at the Varna Opera and “Don Giovanni” at the Nuremberg State Theater in 23/24. In the next two semesters I will dedicate myself to teaching at the Academy in Berlin, where I am invited to be a guest professor. I will take care of the growing opera generation with the greatest pleasure!

- And at the end of our conversation, what will you wish to the spectators and admirers of operatic art?

- Dear spectators, welcome to the opera! We are expecting you! Be healthy and make us happy with your presence, your interest and support. I am glad that the measures have dropped and we can create for you again, with full halls and feedback.