Extra dates for the spectacle, in January the performances are dedicated to the 95th Jubilee of the great Russian choreographer Yury Grigorovich

The New Year 2022 bean at Sofia Opera and Ballet with a fairy-tale winter mood in the company of Pyotr Ilyich Tchaikovsky’s ballet pearl “The Nutcracker”.

The spectacle is appropriate for young and more mature audience as a fairy-tale, full with wonders, which no one would like to ever end. Music, classic and characteristic dances teak out imperceptibly in the foreground the philosophical generalizations about the human being and the world, about the personality and the society and the fact that good always wins and always has to be with us, around us and in us ourselves, shared from Sofia Opera.

In the role of Marie alternate Boryana and Kristina Chochanova-Ivanova, and of The Nutcracker Prince – Nikola Hadjitanev and Tsetso Ivanov. A children’s choir under the direction of Tanya Lazarova also takes part. 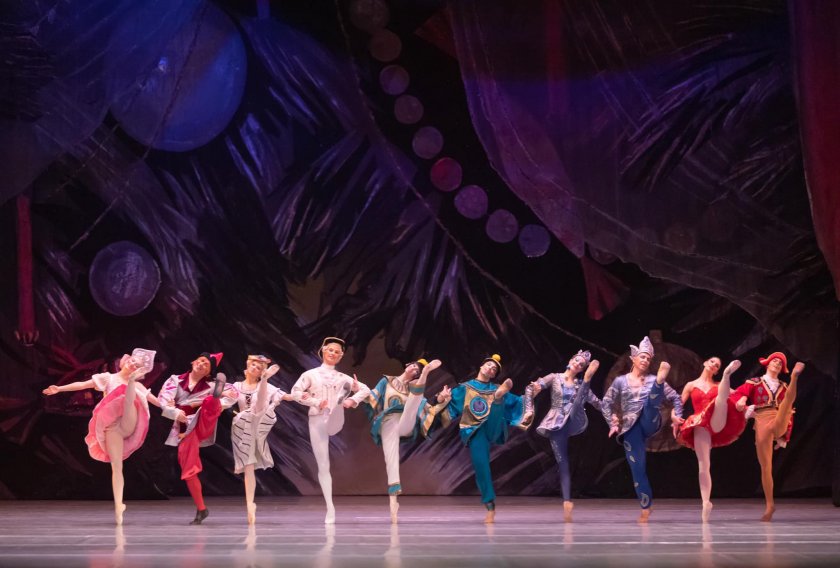 This is the story of a little girl, which expects in vain her Christmas present in the Holiday eve. And when she receives a nutcracker in the form of a soldier in beautiful uniform, she still doesn’t know that for her is upcoming a fairy journey, in which she will be at war with the Mouse King, that the toy will turn into a prince, who will take her away to the dancing snowflakes and fairies, and in the end she will play with the most beautiful dolls and flowers!

On 2 January 2022 the great Russian ballet master Yury Grigorovich celebrated his 95th Jubilee. Sofia Opera and Ballet marked his personal celebration with the ballet “The Nutcracker” – choreography by Grigorovich and dedicates its January spectacles to the Maestro.

The ballets “The Tale of the Stone Flower” (1965), music S. Prokofiev and “The Nutcracker” (1988), music P.I. Tchaikovsky, set on the stage of the Sofia National Opera by Yury Grigorovich, enjoy enormous success and are a real triumph for the Bulgarian ballet art.

Grigorovich’s choreographies are part of the repertoire of all world ballet stages and this proves indisputably his artistic genius. Yuri Grigorovich is author of eight original ballets, and among the classic ballet titles, edited and staged by him, are “Swan Lake”, “Sleeping Beauty”, “Giselle”, “La Bayadère”, “Don Quixote”, “Raymonda” and many others, which form the main repertoire of the Bolshoi Theatre.

Sofia Opera and Ballet wishes Yuri Grigorovich health and longevity. For us it is a real honour that stagings by him are part of our repertoire and that the Bulgarian ballet has not just once touched on his mastery and talent. Undoubted is the enormous contribution of the ballet maestro for our native ballet art and we feel proud of the fact that we were privileged to touch on the talent of this remarkable and unique artist. 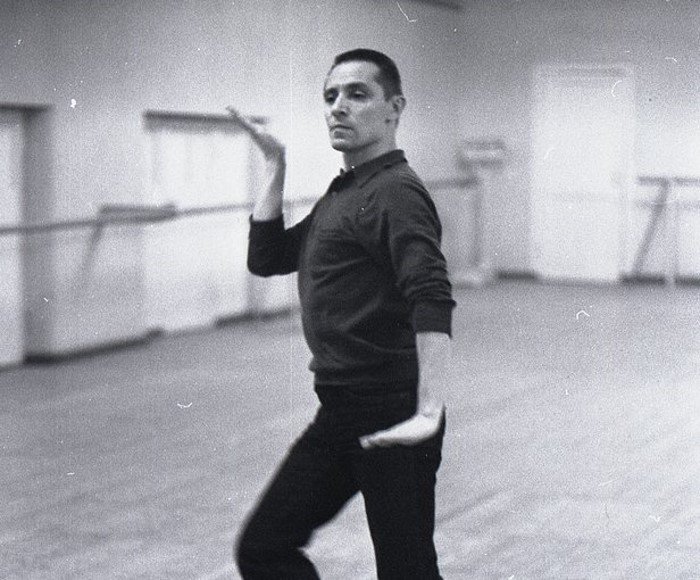 Pyotr Ilyich Tchaikovsky the ballet “The Nutcracker” in 1891-1892. Its premiere was on 18 December 1892 at the Mariinsky Theatre in St. Petersburg. The premiere didn’t have great success, remind the history of the work of art from Sofia Opera and Ballet.

For the first time the ballet was staged outside of Russia in 1934 in England. In 1944 “The Nutcracker” was produced also in the USA, in San Francisco. After 10 years Tchaikovsky’s work of art was performed in New York, where it had great success. Since then, the ballet is set traditionally every year around Christmas. The libretto of “The Nutcracker” is written by Vsevolozhsky - Petipa, based on Ernst Theodor Amadeus Hoffmann’s fairy-tale of the same name.

Hoffmann was a German writer, composer, conductor, music critic and painter. Fully developed, till the end of his life he considered himself to be composer. His work is referred by the historians of culture to the Late Romanticism. Hoffmann’s contemporaries, among who Schiller and Heine, showed disregard for his works. Only after his death the interest for his works was reborn. 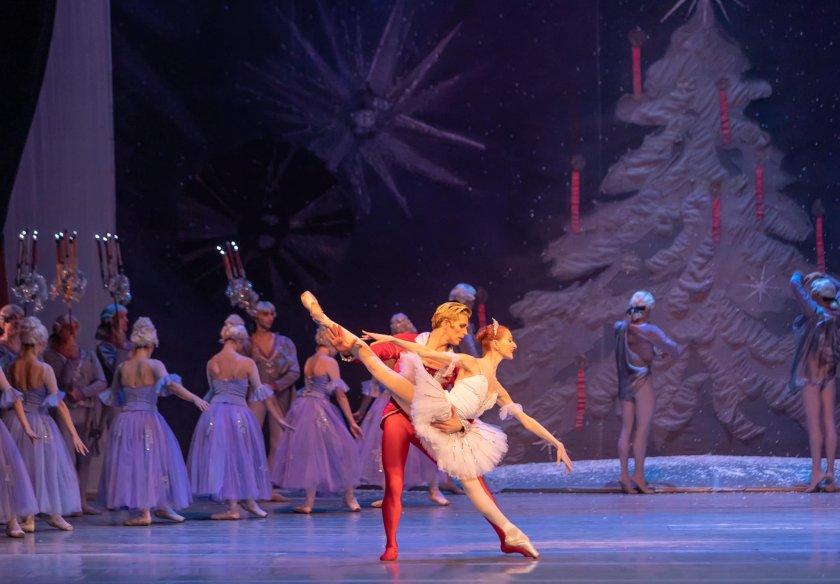 The libretto of “The Nutcracker” represents at first sight an interesting fairytale: There is a beautiful winter outside. Children play and make a snowman. In Marie’s home the elder are finishing the Christmas decoration. The first guests arrive and the Christmas tree shines forth with incredible beauty. Marie and Fedya are dancing merrily around it and playing with their dolls. The guests are dancing too, together with the children.

Marie is searching Drosselmeyer among the guests, in order to see what kind of present he has brought for her. At last, Drosselmeyer arrives together with his assistants. They carry in the house many presents made for the Christmas night. Dressed in a cape, Drosselmeyer, who is a magician, shows before the guests dances of distant and exotic peoples. 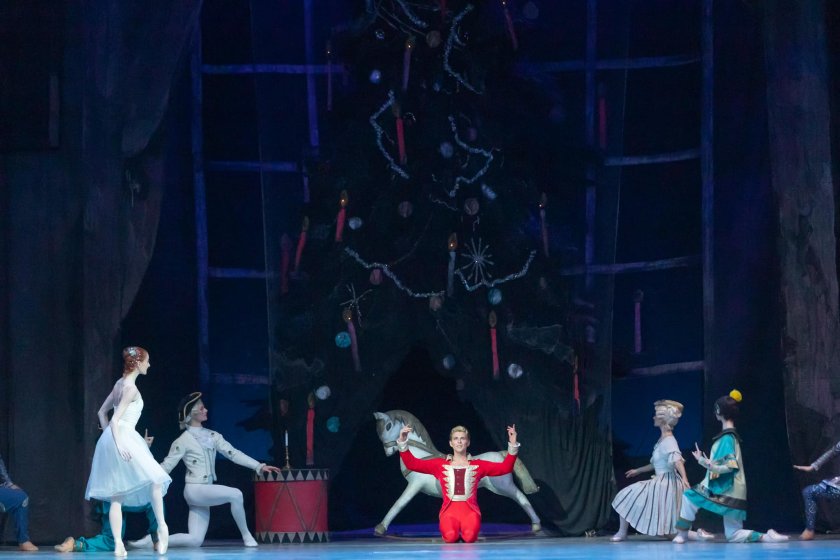 Immediately after, the magician amazes the present ones with his new invention – a soldier-toy, which can crack nuts. All children are in love with the soldier. Suddenly the toy breaks down. Marie becomes sad and asks Drosselmeyer to repair it. After her wish was fulfilled by the magician, she plays merry dances with the Nutcracker. At the end, tired, she falls asleep in an arm-chair. She dreams of evil forces who want to steal her favourite doll. Marie starts fighting with the Black Queen. To her aid comes not someone else, but the Nutcracker. In spite of the resistance, the Queen captures the Nutcracker.

The girl is suffering a lot and begs Drosselmeyer for help. Both get transported into the Kingdom of Dark forces. Everything around is ice-bound, but the good magician succeeds to chase away the evil sorcerers. Suddenly, the Nutcracker transforms into a beautiful prince. Marie and the prince fall in love with each other. The moon transforms into a boat and transports them into the Kingdom of Flowers. Everybody there is happy and dancing merry dances. Little by little, the night goes away. Marie awakes and hugs her favourite doll the Nutcracker. 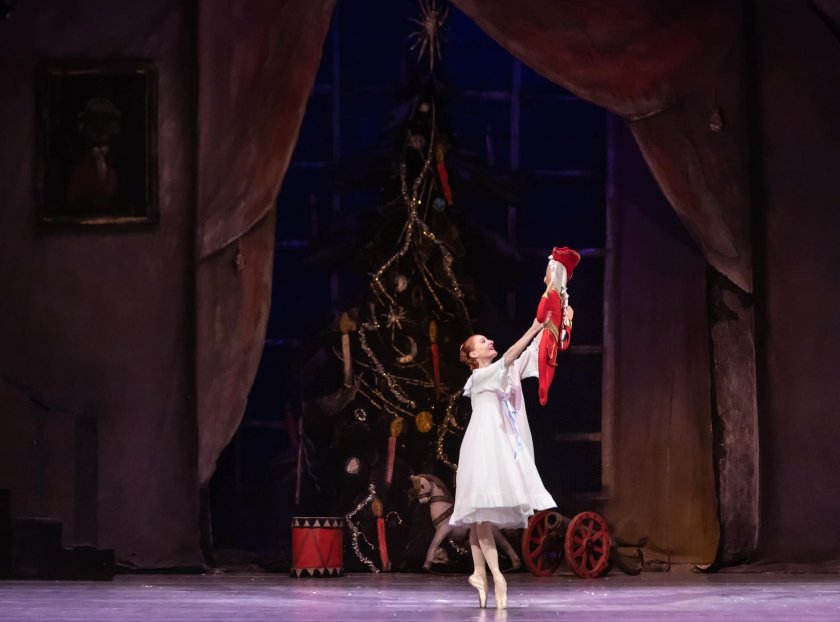 In the years he was writing his music of genius of the ballets “Swan Lake”, “Sleeping Beauty”, “The Nutcracker”, the operas “Eugene Onegin”, “The Queen of Spades” and his many symphonies, Tchaikovsky /1840-1893/ had an unhappy private life. In 1866, he was appointed as professor in theory and harmony at the Moscow Academy of Music. The composer held that position until 1878.

The reason to withdraw from the lecturer's work was the rich widow - the baroness Nadezhda von Meck. Tchaikovsky and the baroness were in correspondence with each other for 13 clear years. Nadezhda adored the composer's music. She had a proposal for him. She gave him an annuity of 6000 roubles, so that he could create calmly. Her condition was that they were never to meet. The genius and his patroness met only twice but they behaved as strangers. 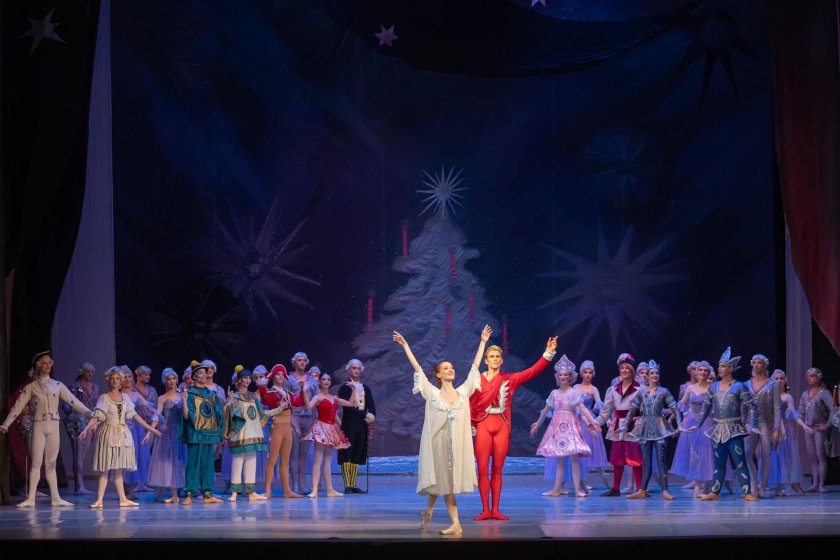 Once Tchaikovsky informed the baroness he intended to get married. The singer Antonina Miliukova wrote him a letter that she was in love with him. Tchaikovsky was startled and flattered at the same time. Despite everything, he didn't pay attention to the young lady. But Antonina was in love and she decided to achieve her goal. She wrote a second letter to the eminent musician and begged him not to be indifferent.

Pyotr Ilyich guessed that the baroness could cease with her maintenance, if he decided to marry. At the end he contracted a marriage, but Nadezhda von Meck at once forgot about him. Tchaikovsky confessed himself before the baroness. “My wife – he reported to her – is doing her best to please me. Our home is cosy. Everything is clean, new and beautiful. But I am looking at all this with hate and spite.”

Nadezhda advised the Maestro to get used with his wife. In this moment Tchaikovsky was close to the thought of suicide. He called for no reason his wife an intruder. Thus, the composer parted from Miliukova, but he didn't divorce. Antonina was heart-broken and she entered a clinic for mentally ill people. There she spent the rest of her life.

Thanks to Nadezhda von Meck's efforts, Tchaikovsky survived the horror to be married. Before his patroness he shared: “After the parting, I finally realized that nothing is so useless than to make yourself what you are not. Now I am not just living, but I am also working. I know that you don’t need to thank you all the time. I would like, however, to tell you that I owe to you everything, everything. I love you infinitely. Yours P. Tchaikovsky”. 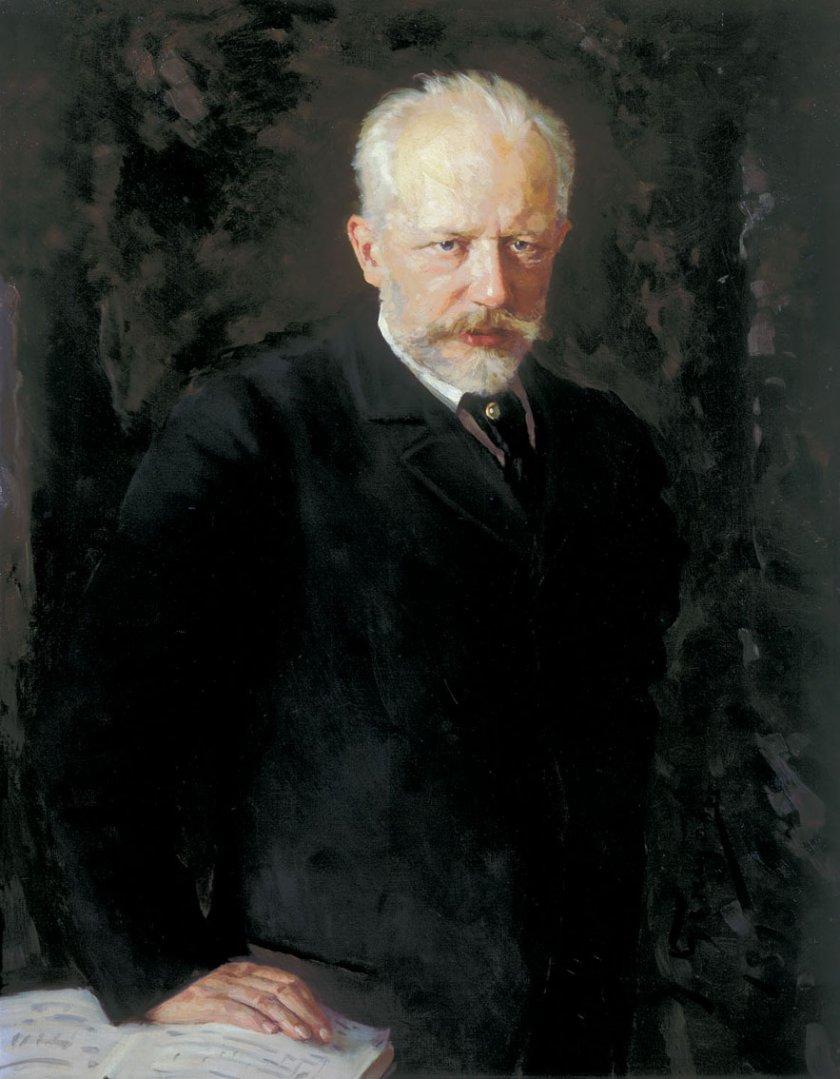 Nadezhda von Meck lived only three months longer than the great composer. She was buried in the graveyard of Novoalexeevsky Monastery in Moscow. Today this graveyard doesn’t exist – a highway passes over it. Nobody knows also where was buried Tchaikovsky’s official spouse.

Prince Felix Yusupov, count Sumarоkov-Elston - junior /1887-1967/, one of the eminent representatives of the Russian aristocracy, wrote his memories in exile. From London and Paris where he lived, he pointed out that he wanted to acquaint the Western world with the Russian geniuses. The prince gave a solid amount from his wealth, in order to stage “The Nutcracker” many years long for Christmas in Great Britain and France. Prince Yusupov was also the murderer of the muzhik Rasputin, but in the history of Russian ballet he shall be remembered as a benefactor.

“There is no other genius like Tchaikovsky, emphasized the prince in his memories. I can and I must always be on the side of his great music works”.

“The Nutcracker” is a phenomenon, which was performed with great success since its creation and it is one of the works, which the prince glorified till the end of his life, shared more from Sofia Opera