Again “Aida” by Giuseppe Verdi, staging by Hugo de Ana, on the stage of the Sofia Opera

/CROSS/ The premiere of Giuseppe Verdi’s immortal work – the opera “Aida” took place for the first time in Cairo on 24 December 1871. Since then elapsed 150 years, but Verdi’s work of art is in the repertoire of all theatres around the world.

What is the story of this unforgettable opera?

Initially, the Egyptian viceroy Isma’il Pasha proposed to Verdi to compose a hymn in honour of the opening of the Suez Canal – an event, which was marked also by the opening of a new theatre in Cairo, but the composer didn’t show special interest in his offer. After the opening of the new opera house on 1 November 1869 with a production of “Rigoletto”, the Egyptian ruler was decided to commission a new opera work, the world premiere of which to be equal to the brilliance of the newly opened opera theatre. This way was born “Aida”.

In the opera “Aida” sounds the classic Verdi: it is a story, the dynamic of which is set in motion by the love of one human being for another one, broken off by the surrounding world.

The performance on 24 April is dedicated to Kamen Chanev – a world-known tenor and honorary member of the Sofia Opera. On this date, in the role of Aida will present herself the soprano Tanya Ivanova, a companion in life of many years of the early gone away from this world Kamen Chanev.

Conductor of the three performances is Evan-Alexis Christ.

In the end of November 2020, Evan-Alexis Christ debuted at the Sofia Opera and Ballet with Plamen Kartaloff’s new production of “Elektra” by Richard Strauss. 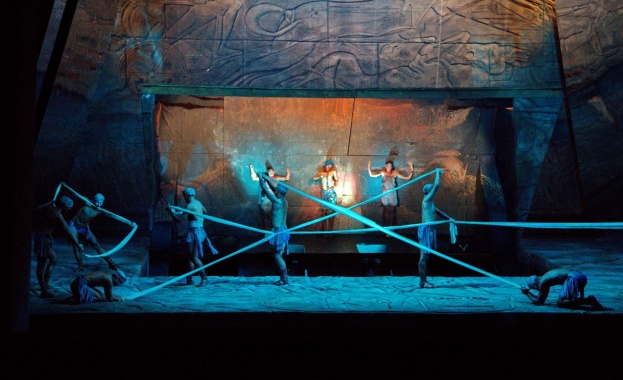