Lilia Kehayova before FAKTI: I dreamed of being Whitney Houston!

For the second time in Bulgaria, the opera lovers will have the opportunity to enjoy the opera "Elektra" by Richard Strauss on 6 April this year, on the stage of the Sofia Opera and Ballet. The idea for the realization of the production came from Plamen Kartaloff. Thus, the Sofia Opera will join the most prestigious opera houses in the world, which have in their repertoire the modernist work by Richard Strauss. The premiere of "Elektra" took place during a pandemic and a series of tests of the spirit. But it is also a proof of the courage of the Sofia Opera at this very moment to present to its loyal audience a captivating performance, which outlines a clear vision for the development of the theatre in the near future. Here is what shared exclusively before FAKTI the lead actress Lilia Kehayova.

Lilia Kehayova has been involved in music since the age of 8, when she started playing the piano and studying solfeggio. The great Bulgarian opera singer and vocal pedagogue Elena Baldzhieva directed her to classical singing when Lilia was 16 years old. She began her studies there and finished the special class in classical singing at the Dobrin Petkov Music School in Plovdiv.

In 1995, she was admitted to the Pancho Vladigerov State Academy of Music, where she graduated in 1999 as a bachelor, and in 2002 as a master in the class of Prof. Ilka Popova. Still as a student she made her first steps on the professional stage. In 1998, she debuted in the operetta "The Beautiful Galatea" by Franz von Suppé in the lead role. Followed by Susanna from "Le Nozze di Figaro" by V.A. Mozart, later she sang in the production of "Il Matrimonio Segreto" by D. Cimarosa, staged by the Plovdiv Opera, as Elisetta, as well as Rosina from "Il Barbiere di Siviglia" by G. Rossini at the Veliko Tarnovo Musical Theatre.

In 2001, she took part in the master class of the famous opera singer Sylvia Geszty in Luxembourg. In the same year, she was a laureate of the New Voices competition at the Sofia Opera, as a result of which she was included in the productions of "Carmen" as Micaëla and in "La Bohème" as Musetta. In 2003, she became a scholarship holder at the Boris Christoff Bulgarian Academy of Arts and Culture in Rome, where she specialized with the Italian opera singer and longtime stage partner of Boris Christoff Mirella Parutto.

With Yana from "Yana's Nine Brothers" she made a final turn to the dramatic repertoire and turned the difficult musical and stage role into her war horse, performing it many times on the stage of the Sofia Opera and Ballet, as well as on the open stages during summer festivals.

In 2020, Lilia Kehayova became the first performer in Bulgaria of the difficult and demanding from the singer role of Elektra from the opera of the same name by Richard Strauss, directed by Acad. Plamen Kartaloff. The work with the world mezzo-soprano Dolora Zajick helped her build the image during her master class at the Sofia Opera and Ballet. "Elektra fully expresses me as a singer and actress. She is my great love on the stage", shared the opera diva Lilia Kehayova before FAKTI. 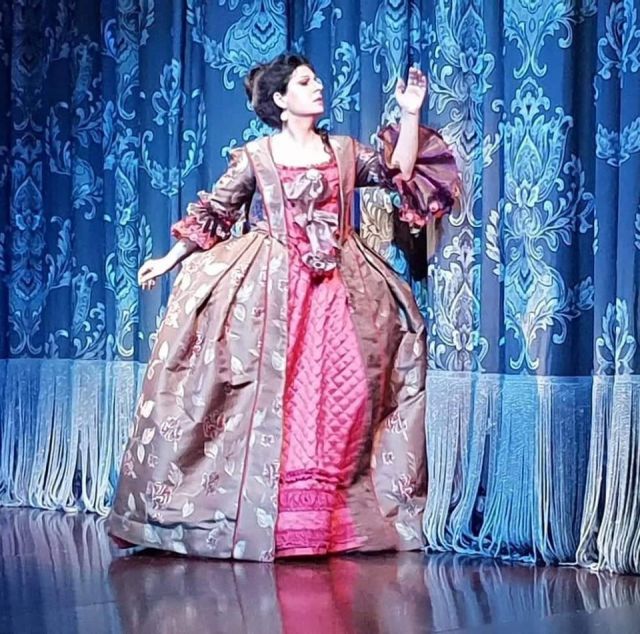 - You made your debut on the opera stage with "The Beautiful Galatea" in the role of Galatea. What was this debut for you? How did the audience receive you?

- We were all very excited – we debuted not only the singers, but also the stage director, who was still a student at the time. The year was 1998. The operetta hall in Pazardzhik in the winter was icy, like every hall in Bulgaria at that time, but we, although only in tunics did not feel the cold. I was in the role of the Beautiful Galatea, and my ancient Greek-style costume made me feel like Medea, like Norma, maybe. The role gives a great opportunity to show voice and some technique, and the performances passed with a lot of joy and laughter by the audience – some of the scenes we improvised. It was a great adventure.

- You are a young artist and yet this was your childhood dream – to become an opera singer? Why not a ballerina, for example? Most girls dream of just that ...

- In fact, I dreamed of being Whitney Houston! "Unfortunately", at the age of 16 my voice was perfectly inverted, and Whitney's chest singing was beyond me. I was very surprised when my wonderful first teacher in Plovdiv Elena Baldzhieva told me that I have a completely operatic voice, and I thought that if I can't sing Whitney, I don't have any voice. When things started to happen quickly with love, I accepted my new singing career.

- Mrs. Kehayova, you have been a member of the Sofia Opera for seven years. What did each aria, each role on the opera stage give you?

- The opera is my life and the meetings with it, with the music, with the colleagues and most of all with the voice that God has given me realize me as a person and an artist. The most desired meeting, of course, is with the audience. Such an encounter fills the creative consciousness with unique energy. I sang Tamara from "Borislav" – I debuted with her in Tsarevets in 2015. Then came Tatyana from "Eugene Onegin", Amelia from "Simon Boccanegra" and others. The role that developed me the most was certainly Jana from "Jana's Nine Brothers". Very complex and gloomy work, many layers in the image. We had the good fortune for a long rehearsal period with maestro Kartaloff and we did a lot of work. I would say that Yana opened for me the door for Elektra.

- What role do you long for? What do you want to sing? Now is the time to say it and it to be heard!

- I think it's time for Turandot. I like the simple and very clean almost sacred vocal expression of the character, her virgin zeal. I also really like Brunnhilde from "Die Walküre" and "Götterdämmerung" by Richard Wagner.

- You have established yourself with roles such as Tatyana from Tchaikovsky's "Eugene Onegin" and Yana from Lyubomir Pipkov's "Jana's Nine Brothers". In which of the two characters were you yourself?

- At some point in her life, every woman is Tatyana. Together with the stage director Vera Petrova, we created the character with a lot of love, we tried to understand Tatyana by looking inside ourselves. Yana is in so much pain that it's hard to talk. Identifying with Yana is very scary, but of course there is that in life too. During the time of the spectacle, I put all my knowledge of pain into Yana, but when it's over, I try to shake it off. The opposite would be dangerous.

- How did the work with the unsurpassed Anna Tomowa-Sintow on the role of Donna Elvira in "Don Giovanni" affect you?

- Donna Elvira was a very important and interesting experience for me. Mozart requires from the singers an almost instrumental sound, which is not easy for me. However, with the help of our remarkable singer and personality Anna Tomowa-Sintow, I was able to understand the style and the palette I want from myself. With her I prepared the role of the Composer from "Ariadne of Naxos", which is to appear on the stage of the Sofia Opera and Ballet soon. I am exceptionally grateful to Anna Tomowa-Sintow for the joy and inspiration to work with her.

- Upcoming for you is a responsible role – Elektra in the opera "Elektra" by Richard Strauss. How did Dolora Zajick's master class contribute to the development of the character of Elektra?

- Elektra is Everest in soprano roles. You can't start it without the encouragement of people who understand singing in the heaviest repertoire. Although I managed to work out only the difficult monologue of Elektra with Dolora Zajick, she gave me great confidence while working with me, constantly confirming that this is my role. If, in addition to voice and technique, courage is required for the role, she gave it to me unreservedly.

- How do you perceive the music of Richard Strauss and his modernist work in general?

- Strauss joked that he was not a first-class composer, but he was the best of the second-class composers. Apart from the fact that he obviously had a wonderful sense of humour, he wrote a very complex work. It must be said that "Elektra", which is his second opera, is the last with exactly that sound. Then there is the splendour of intertwining harmonies, but still in the direction of the second half of Elektra, which is much more lyrical. In the beginning it was difficult for me – our ears are set in a certain way – we perceive Italian, French and Russian opera as the norm. The sound and harmonious chaos, though only illusory, because with Strauss everything is "resolved" musically, confused me, learning was difficult. But with each next step into the dramaturgy, a door was opened to the realization of the genius of music. I would say that Elektra expresses me completely as a singer and actress. She is my great love on the stage.

- What is the role of Elektra for you? Which would you put in the first place in your personal interpretation?

- Elektra is a character to which you either completely surrender, allow yourself to be subdued and conquer yourself in the end, or retreat into fears by tearing you down vocally and mentally. I am an enthusiastic nature, the challenges challenge me. In terms of interpretation, things are, of course, profound. To a large extent, Elektra's interpretation is deeply intuitive. Once you immerse yourself in the lyrics, and they are very strong – every word of the monologue is like a spell, the spiritual and bodily senses react automatically.

- What do you think Elektra's drama is?

- In every woman's life, the father is the most important and defining figure. When the father is taken away in such a vile and disgraceful way, Elektra's response to her helplessness is monstrous and self-destructive malice and anger. Such powerful feelings that in the end she fails to endure the triumph she desires with all his being. 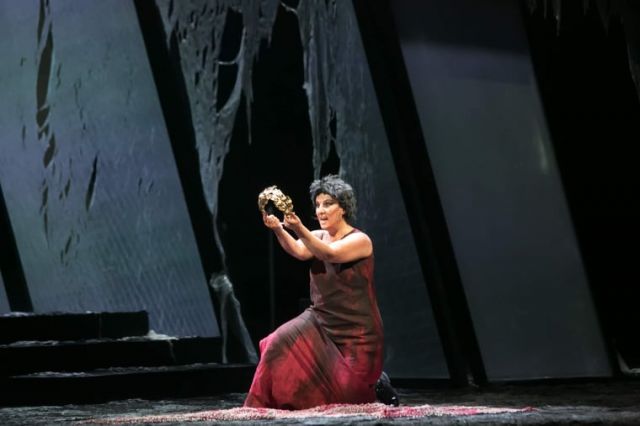 - You claim that the directing of Acad. Plamen Kartaloff has made the spectacle three-dimensional. Why? Where exactly is the 3D element?

- Maestro Kartaloff's work with the spaces is well known. Our spectacle is no exception. In addition to the wonderful construction of our characters and relationships on the stage, he added the element of the ancient Greek chorus, which I do not want to reveal too much for those who have not seen it. The appearance of Agamemnon and the symbolic physical disintegration of the world of Elektra finally give the spectacle the three-dimensionality I am talking about.

- Which artists are participating in the spectacle?

- What would you wish to our readers and to the spectators who long to see "Elektra" on the stage of the Sofia Opera?

- Dear friends, welcome to our wonderful performance! The Sofia Opera and Ballet have harnessed all their creative forces to create a unique experience for the senses. Be healthy and see you soon! 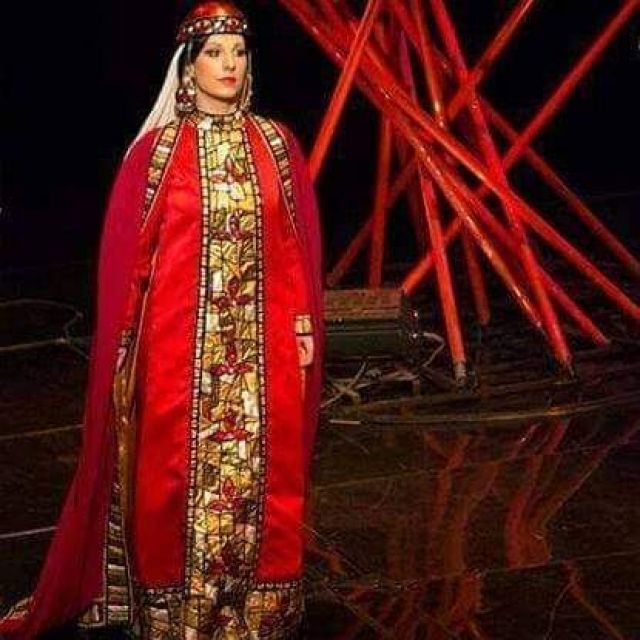