Kalin Vrachanski turned out to be father of five children

The favourite of the spectators – Kalin Vrachanski turned out surprisingly to be father of not only one, but of five children. However not in the case of life, but on the stage. The charismatic and talented actor will show his singing skills at the Sofia Opera, where he enters in the lead role of the teacher Andreev in the musical “My Father the Painter”. Special participation has the legend of the Satirical Theatre – Slavcho Peev, who is the first performer of the role of the Rich Man in the film of the same name by the stage director Stefan Dimitrov. 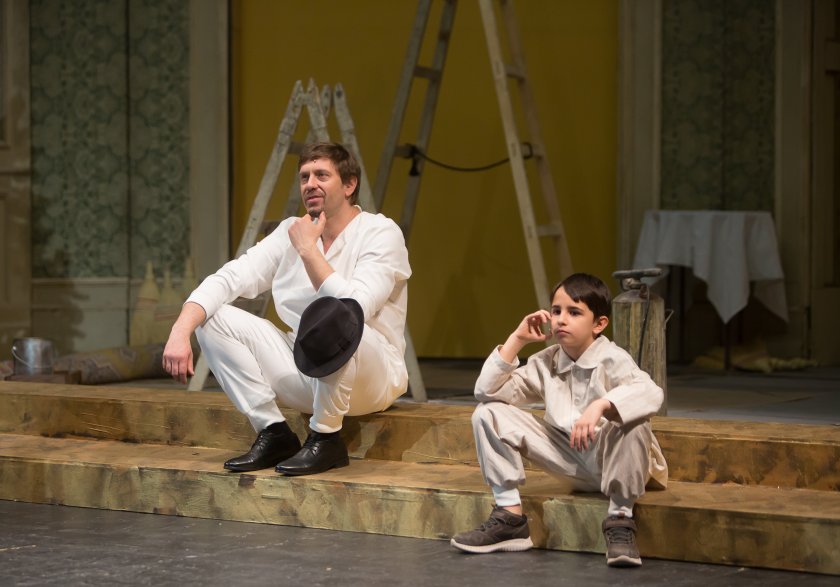 The concept for the stage realization of “My Father the Painter” is by the stage director Plamen Kartaloff, in order to continue the life of one exceptional creation, of one film-musical made in 1974 with legendary Bulgarian actors. For the first time this happens with the same enthusiasm and passion to develop the musical as a genre also at the Opera. And this is in balance with the priorities of the great examples of the world treasury from the prestigious opera repertoire of the Sofia Opera.

And here is the plot of “My Father the Painter”, known to the 40+ generations. 31 December 1932. Andreev is a teacher in history, who has left without work in the eve of the New Year. The lack of money troubles him and together with his five children he decides to visit his cousin Spas, in order to ask a loan from him. 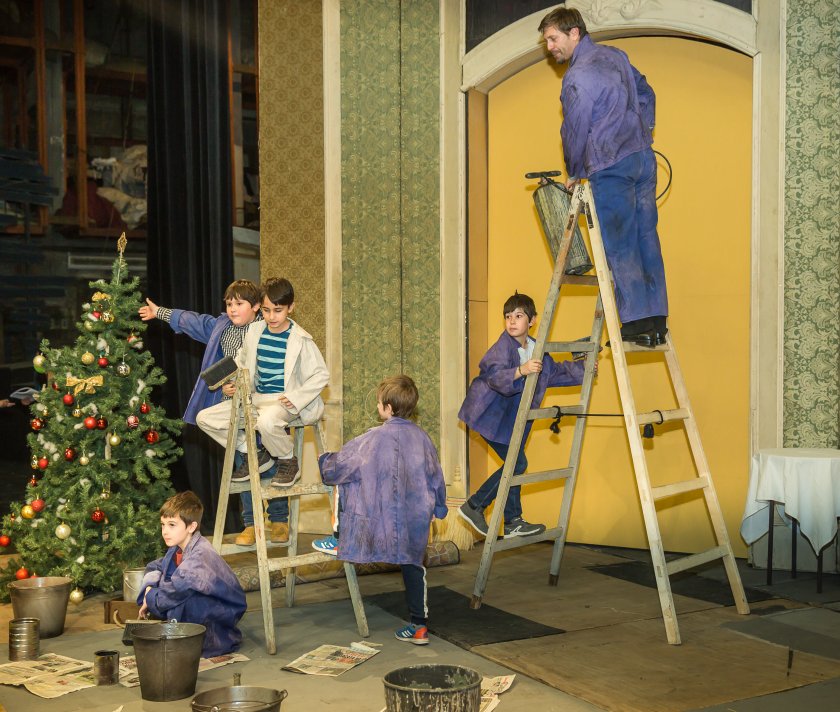 Arriving there, they understand that the cousin was sacked and doesn’t have money too. Desperate, the father and the children wander on the streets of Sofia and observe people’s amusements. Tired and frozen, they are going back home. On the way they meet a neighbour of theirs, a rich manufacturer. He explains that he was expecting important guests for dinner, and his house wasn’t painted. He offers a lot of money, if everything is ready till 16.00 o’clock.

The teacher Andreev agrees gladly. The Rich Мan goes with his family by friends of his. In the set hour everything is ready, but the manufacturer calls он the phone and declares that he won’t be back till 3 January. Angry with his dishonesty, the father-painter gathers his family at a rich dinner. In the film the role of the teacher Andreev is performed by the legendary Kosta Tsonev. 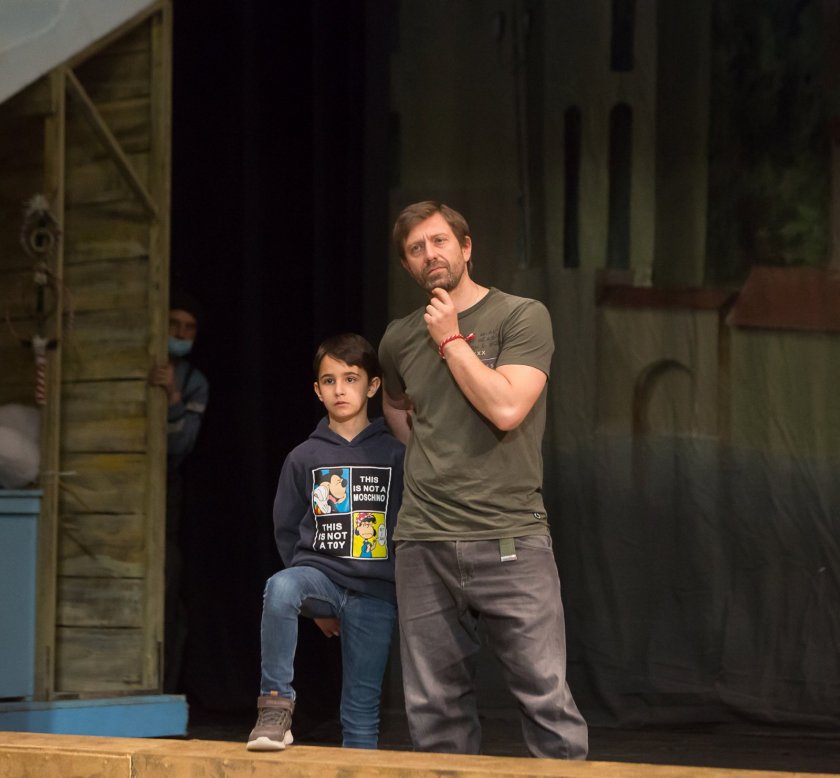 In the series of hit musicals, produced on the stage of the Sofia Opera, are some among the realized recently first as film productions with world fame, “Mamma Mia!”, “Les Misérables” and “Shrek”. And one new title besides them, as a privilege for the audience of the Sofia Opera, is the newest offer for musical on the opera stage “My Father the Painter”, with its first stage version by Plamen Kartaloff.

The stage director, who staged for the first time in Bulgaria the musicals “Fiddler on the Roof”, “Sunset Boulevard”, “The Phantom of the Opera”, “Mamma Mia!”, “Les Misérables” and others, gives now a chance not only new audience to be attracted at the Opera, but in a new way to be interpreted for stage one exceptional cinema dramaturgy of the Bulgarian musical “My Father the Painter” with Petar Stupel’s and Konstantinn Dregnev’s music, to the scenario by Vasil Tsonev. The orchestration is by Angel Nikolov. 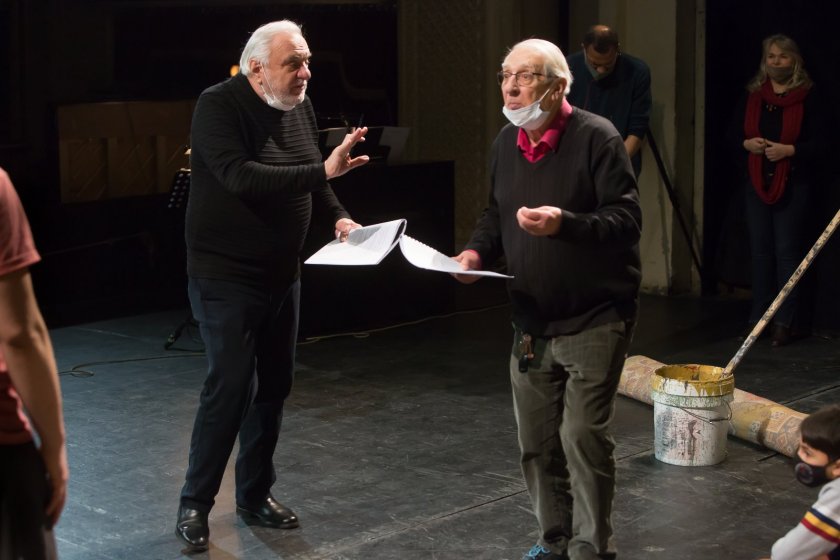 Specially for the production of “My Father the Painter” at the Sofia Opera was invited and was rehearsing with a special role Tatyana Lolova. Despite of her untimely loss, she will receive an honorary participation in the action aspects of the directing, in order to be, although for a short time, always in the spirit of the spectacle.

All other roles in the new stage interpretation of “My Father the Painter” are performed by Angel Hristov, Gergana Rusekova, Krasimir Dinev, Dimitar Stanchev, Vesela Delcheva, Silvana Pravcheva, Biser Georgiev, Nikolay Petrov and others. The six boys are the talented soloists of the Talasamche Theatre with director Dimitar Konstantsaliev and a children’s vocal group with director Tanya Lazarova. Conductor is Svetoslav Lazarov. With the participation of the chorus and the orchestra of the Sofia Opera. Chorus master is Violeta Dimitrova. Choreographer is Riolina Topalova, set and costume designers are Nela and Kristian Stoyanovi. 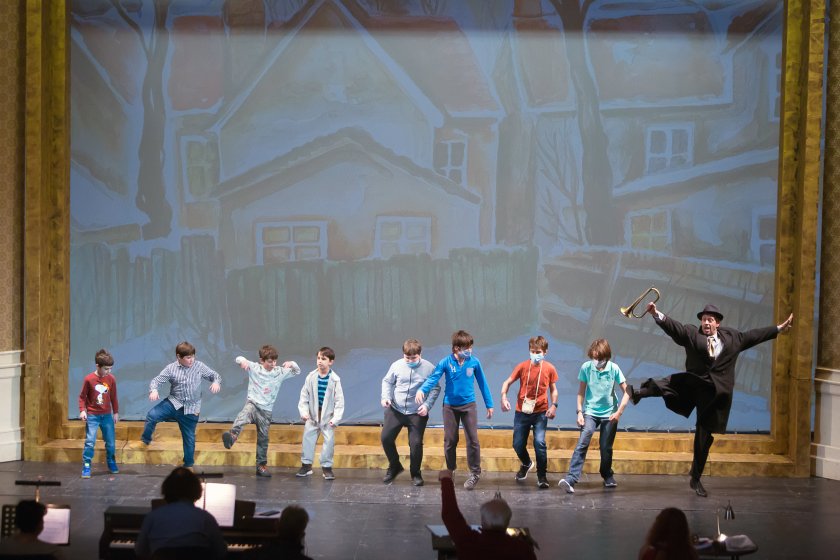 The premiere was scheduled for the traditional New Year’s programme of the Sofia Opera, and namely on 31 December 2020, the exact date on which takes place the action according to the scenario. Because of the imposed security measures during the pandemic, the work of the artistic teams was interrupted many times, but already is announced the new date for the premiere, and it is on 8 May, Saturday. The next spectacles are on 9 May, Sunday, at 11.00 and 19.00 h, and on 10 May, Monday, at 19 h.