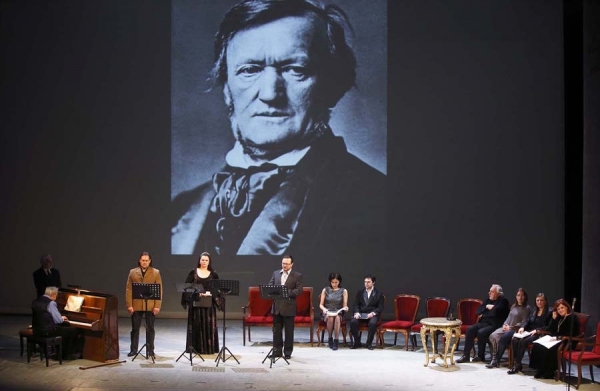 While in the newly opened hall “Bebotsi” of Sofia Opera and Ballet was running the second of the concerts for the youngest audience, and on the last floor of the theatre grown up children were enjoying the current spectacle for nippers, another Sunday audience filled the stalls of the big hall. Professors and associate professors from different universities, students, as well as passionate music lovers and fans of Wagner’s work found themselves there in order to attend the first for 2014 gathering of the Wagner Society in Bulgaria.

Topic of the meeting was the opera “Tristan und Isolde”, but even the fieriest Wagnerians could hardly imagine the aesthete’s Sunday matinee, in which turned the event. It was opened by Plamen Kartaloff, Director of Sofia Opera and Ballet, also in his capacity of director of the future title. Listening to the narrative about the work of Richard Trimborn, music and stylistic consultant of the Opera, the participants made an original “leap into the future”, transporting themselves in February 2015, for when is set the date of the premiere. This happened under the severe look of Wagner from a huge portrait of him, spotlighted on the stage, and with the assistance of the wonderful soloists Radostina Nikolaeva, Tsvetana Bandalovska, Mariana Zvetkova, Tsveta Sarambelieva, Biser Georgiev, Martin Iliev and Plamen Papazikov, who performed fragments with piano accompaniment by Richard Trimborn. Listening to their performances, the select audience once again realized the reasons for the so complete and overall result, achieved in the previous large scale Wagner project of the director Plamen Kartaloff – the tetralogy “Der Ring des Nibelungen”, prepared under his direction. Real precision, combined with much enthusiasm and desire the audience to be reached by the best possible result emanates already now from the new challenge, for which everyone in the theatre is preparing.

Wonderful end of the meeting was the film by Miglena Stoycheva and the operator Nedyalko Danev “The Bulgarian “Ring” of Wagner”, broadcasted recently on BNT 1, which reminded about some exciting moments from the work on the first in our country and on the Balkans premiere of Wagner’s tetralogy. Its second performance in Sofia from 23 to 29 July under the baton of the famous Kazushi Ono already now excites a thrill of expectation of the next meeting with something really significant and stirring – such a thing, which only great art can be.