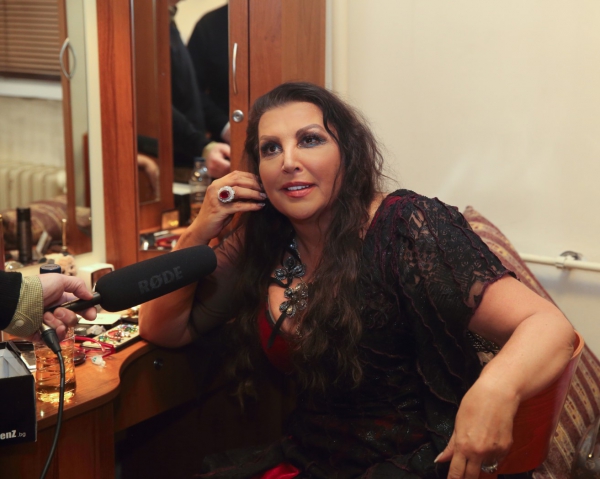 After her debut in the role of Amelia in 1987 on the stage of La Scala in Milan with Luciano Pavarotti, Maria Guleghina has performed this part dozens of times on the biggest world stages. The singer with a voice of a queen, as the critique calls her, will be guest for a second time on the stage of the Sofia Opera in “Un ballo in maschera”, after her stunning triumph in “PARSIFAL” on our stage. Guleghina was guest-performer in Richard Wagner’s last opera at the invitation of the stage director and Director of the Sofia Opera Plamen Kartaloff. She received the ovations of the audience of “Parsifal” after 12 lead roles at La Scala in Milan, 200 spectacles at the Metropolitan Opera, Arena di Verona and dozens of awards all over the world.

“UN BALLO IN MASCHERA” is a story about love, hatred, jealousy, revenge, envy and politics, but most of all about one man, who is looking the way to himself and to what he loves. The impossible love leads to a cruel fight. This is a collision between the love and loyalty to the best friend and the strong passion for his wife.

More than 10 years, this production is one of the audience’s favourites. The premiere was in 2007, and then in an interview the stage director Plamen Kartaloff shared: “For me one modern direction or conductor’s interpretation is only a part of the opera spectacle, in which the singers are the main instrument.”

A scene from “Parsifal” by Richard Wagner

Maria Guleghina is among the greatest names in the world of opera. Till the end of season 2018/2019, she will sing on the prestigious stages of the Mariinski Theatre in St. Petersburg, the Berlin Opera, Teatro Colón in Buenos Aires.

Don’t miss her participation on the stage of the Sofia Opera in “UN BALLO IN MASCHERA” by Giuseppe Verdi on 29 May at 19 h.!

The assassination of King Gustav ІІІ of Sweden during a ball in 1792 is a historical event, which serves as a plot of dramas and operas. The opera “Gustave III, ou Le bal masqué” by Daniel Auber, written after E. Scribe’s play of the same name, is among the most popular works on this subject matter. Scribe’s drama and the libretto to its motives serve for a plot basis of Verdi’s opera.

Not a single of the Maestro’s works had undergone such censorial trials like “Un ballo in maschera” /initial title “Una vendetta in domino”/. The Austrian censorship categorically forbade the presentation of the scene of assassination of a crowned head. The ban was dictated by a recent political event – in 1858 the Italian count Felice Orsini attempted Napoleon III’s life because of his treason against Italy. Verdi was proposed to transfer the action in the Middle Ages in Florence, and turn the king into an ordinary nobleman. Verdi refused, although he was threatened with a penalty claim on the behalf of the theatre impresario. After one year, the censorial ban was repealed. But, however, to Verdi were imposed several concessions. The assassination of an English governor from North America could not evoke unwanted associations. This way King Gustav III became Richard (Riccardo) Warwick – governor of Boston, and his assassinator – the officer Anckarström was called Renato. Respectively the rest of the personages received English names too. With a lot of reluctance Verdi made these changes just to save the opera.

“Un ballo in maschera” belongs to the Maestro’s top creative achievements, in which text, music and action are inextricably bound. The psychological conflicts are depicted with Shakespeare’s power, and at the same time the strength and dramatism combine with most precise details of the characters’ states of mind. Verdi masterly uses the method of contrast – sinister images during festive revelry, tender lyric during a mysterious and gloomy scene. “Un ballo in maschera” distinguishes itself with rich and expressive vocal parts, brilliant orchestra, masterly constructed ensembles. The finale of Scene II of Act I is among the top ones of the musical dramaturgy. Not a single love duet in Verdi’s entire oeuvre can be compared to the duet of Riccardo and Amelia from Act II. In a letter to Antonio Somma, Verdi explained that exactly into this scene he had put the whole “disorder” of passion. Love in reality is the main subject matter of this opera, called by the well-known Italian critic Massimo Mila Verdi’s “Tristan und Isolde”, but translated into Italian and transported under a hot and passionate sun.

“Un ballo in maschera” had enormous and deserved success still at its first presentation in Rome on the stage of Teatro Apollo on 17 February 1859. Very soon under the title “Amelia” the opera was staged also at other theatres in Italy, and after that in Paris, Berlin and other West-European capitals.

The first Bulgarian premiere of “Un ballo in maschera” was on the stage of the Sofia Opera on 22 October 1926, under the baton of Venedikt Bobchevski and the direction of Ilya Arnaudov.

Tweet
More in this category: « On 24 May at 16:00 h – festive spectacle “Yana’s Nine Brothers” at the Sofia Opera The opera “Don Carlo” – 30 years on the stage of our first opera theatre »
back to top