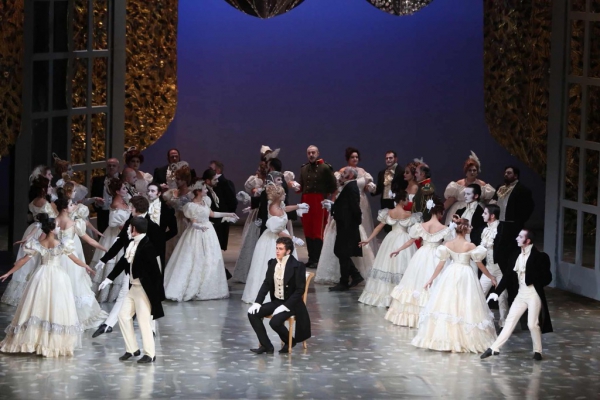 The Sofia Opera marked widely the 100th Jubilee of the first production on the theatre’s stage of P.I. Tchaikovsky’s opera “Eugene Onegin”.

On 10 February was presented a retrospective photo exhibition, and the audience enjoyed a contemporary production. The premiere of the spectacle of the stage director Vera Petrova took place in April 2016, and later it opened season 2017/2018 at Teatro Verdi (Trieste, Italy).

– Pushkin and Tchaikovsky – what do these names mean for you?

– Russian classics has an incredible depth. In my work I am trying to enter maximally into the text and music. Pushkin and Tchaikovsky – this is a bottomless sea, looking for one’s own self, looking for the way towards one’s own self.

The most complex for me in this production was to set off on the way of Eugene Onegin’s mental experiences, to carry out a retrospective analysis of his sensations. For such a short dramaturgical and life period in his life happen the acquaintance with Tatyana, the assassination of his best friend, the flight and return to Petersburg, and in the end – the realizing that his beloved woman would never belong to him.

My conception is to present the entire production as Onegin’s dream. The action takes place, let me repeat, retrospectively. In this dream, Onegin recollects his life and his unrealized love with Tatyana. Namely this “unfulfillment”, hunting the characters, was especially interesting for me.

I would say that the problem of unfulfillment sounds exceptionally up-to-date, as well as the problem of looking for one’s own self. Onegin – this is first of all the question who I would like to be, which role I would like to play, i.e. life’s eternal questions. And for me, as I already said, to make a retrospective journey in the character’s imagination was especially interesting. 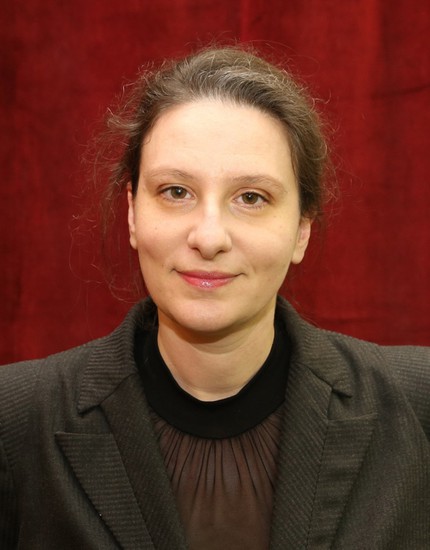 – On what is based your interpretation?

– Partially, my interpretation is based on the conflict between the main characters and the social status quo – this is what passes as a red thread through Pushkin’s entire novel. Undoubtedly, in the opera text there are lost nuances, set by the poet himself, but Tchaikovsky’s music complements his emotional power.

In this production we speak about lyrical romantics. We speak about the conflict human being – society. About the fact that we create obstacles on our own, we put barriers to ourselves, when we are trying to meet the requirements of the those around, and not to follow our own desires. And actually, namely the impulses of our soul have to define our path of life, don’t they?

– One of my principled lines as stage director is to decipher the message which gives us the scores and the dramaturgy, at that without doing anything in contrast to what the authors have created. My work is based on the traditions and the history of our theatre, at that I am always looking into the future, as far as art changes constantly. But leaning in my work namely on the basis.

In my opinion, it is exceptionally important in the new century not to vitiate classical art. In our days it is very difficult to escape from the temptation and not to fall under the so smart pseudo-creativity. It is necessary to keep the balance: not to trespass the musical, aesthetical, professional bounds, but at that to look for and show contemporary trends. Opera cannot exist isolated from the other art forms. But we should not say more than the author told himself. 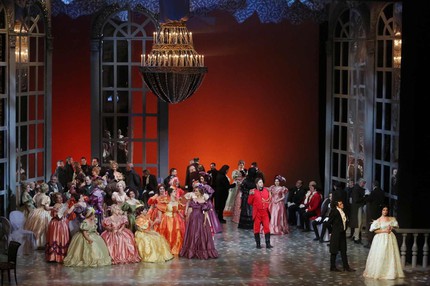 – The critics, as well as the spectators, estimated specially the amazing style of the spectacle, reminding of the cinema aesthetics and stylistics, and the terrific costumes.

– Undoubtedly, this is first of all a merit of the wonderful costume designer Steve Almerighi, who works not only in the field of opera, but also of the cinema. Steve is extremely careful literally to every detail in the costume: from the glove to the feathers of the mask which Tatyana holds in one of the scenes.

I must mention also the impressive sets, so similar to the ones in the cinema. Their author, the Principal set designer of the Bolshoi Theatre of Belarus Alexander Kostiuchenko, has created something absolutely remarkable: the sets are in constant movement, at that they are exquisite to such an extent that there is absolutely no feeling of a brutal impact on the spectator. Thanks to his work, on the stage reigns visibility for lightness and transparency to which I have strived as stage director.

– At that in the spectacle are engaged exclusively young artists?

– Yes, this is an idea of the Director of the Sofia Opera and Ballet Academician Plamen Kartaloff – to invite for participation in the new production of “Eugene Onegin” young and even debuting opera singers, the way Tchaikovsky wanted himself. And it was not at all easy, not only to find young artists, possessing voice and talent, but also they to be trained to manage to cope with the complicated vocal parts and stage characters in a work of art with such a subtle musical artist like Tchaikovsky.

But our theatre considers its mission to engage young talents for blessed, because the Bulgarian land is rich in good singers. We are constantly inviting students of Raina Kabaivanska and Anna Tomowa-Sintow for participation in our spectacles. This year the part of Tatyana performed the 25-years old Stefani Krasteva, for her it was a debut, but still in the past season she appeared in spectacles for children.

– The spectacle had great success also in Italy, namely your “Eugene Onegin” opened season 2017/2018 at Teatro Verdi in Trieste.

– For us it was a great unexpectedness, because namely the theatre in Trieste itself chose a spectacle of ours for the opening of its opera season. And the spectacle passed again with so unexpected for us success. For me as stage director in the beginning of my professional path, it was specially exciting to show my spectacle in Italy, in the motherland of operatic art. But everything passed with great success, we received wonderful reports from the Italian critique, which is very important.

And the work in Trieste itself was a real pleasure. The Sofia Opera placed to the Italian colleagues’ disposition the sets and the costumes, and the orchestra and the singers were from Teatro Giuseppe Verdi. The conductor Fabrizio Maria Carminati knows exceptionally well and feels deeply Tchaikovsky’s music. At that undoubtedly the entire production acquired a little bit different sounding, as if more thickened on the background of our flowing lyrical Slavonic style.

– In the capacity of vocal consultant, you invited the Artistic Director of the Mariinsky Academy of Young Opera Singers, Larisa Gergieva?

– For me personally, it was a great luck that Larisa Gergieva agreed to collaborate with us and became Chief musical director of the production. She is a remarkable musician, she helped me to feel the richness of the great Russian literature and Tchaikovsky’s wonderful music.

With our soloists, chorus and orchestra she literally worked out every word, every note. Incredible mastery and highest professionalism. You understand that it is not at all easy to sing in Russian, don’t you, and under the direction of Larisa Gergieva the entire team managed literally to immerse in the atmosphere of Russian culture.

She invited for the premiere a conductor from Russia – a graduate from the St. Petersburg Conservatory – the 30-years old Zaurbek Gugkaev, who possesses a special Russian conducting style and specifics, which partially adopted our conductor Zhorzh Dimitrov too. 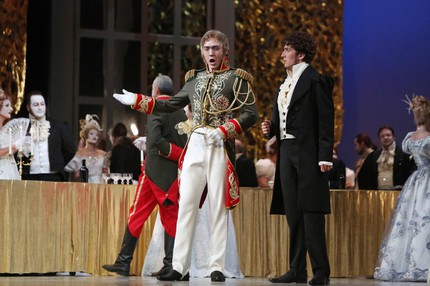 – Tell me with few words about the opened photo exhibition.

– In 1919 took place the first performance of “Eugene Onegin” in Bulgaria. Conductor was Todor Hadjiev, and stage director –Hristo Popov. For the past 100 years this opera became one of the favourite ones of the Bulgarian audience and of the artists of the Sofia Opera.

Ideological inspirer of the exhibition became our dramaturge Milena Nikolaeva. She did a great job, discovering in the archives unique photos, on which are imprinted our well-known singers from the past: Raina Stoyanova, Lyuben Minchev, Dimitar Kozhuharov, Virginia Popova, Ilia Yosifov and many others.

– Should the spectators expect the appearance of new productions of Russian operas on the stage of your theatre?

– Oh, yes! We are preparing for a production of one of the most famous works of Russian operatic art. But for now, please allow me to keep its name in secret. Generally, our theatre, owing to the force of cultural and historical reasons, has experienced strongest Russian influence.

Up to this day I remember what an indelible impression produced in my childhood S. Prokofiev’s opera “War and Peace”, staged in Sofia by Boris Pokrovsky.

The entire opera world turns constantly to the Russian classics. And we must not forget that theatre as a whole is based on Stanislavski’s system. I studied in London with the stage director Katie Mitchell, author of complex symbolical works, but in her creative searches she was also leaning on Stanislavski’s works. His books don’t stop being translated and they have gone through several editions in Bulgaria.

One of the reasons for deciding to engage exclusively young performers in “Eugene Onegin” was the desire to introduce the young generation to the Russian classics, so close to us on a general cultural and ideological level.

For us it is important to keep our Slavonic traditions which formed themselves under the fundamental influence of Russian culture.

The conversation was hold by Anastasia Bubenets.

Tweet
More in this category: « The ballerina Joy Womack in the role of Kitri in “Don Quixote” on the stage of the Sofia Opera and Ballet – 12 May The phenomenon “Mamma Mia!” will be guest-performer in Varna – chernomore.bg »
back to top