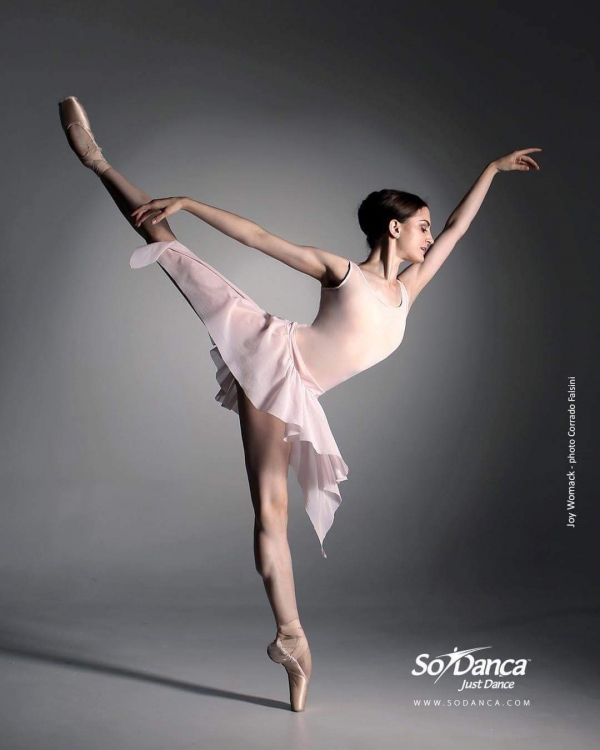 Joy Womack asserts that her faith and life are in worship of dance.

For her ballet is a complex art, with deep historic roots. It’s a world of profound sacrifice and a place where dreams can be made and broken in an instant.

Despite the hardships on the path of the great career, Joy Womack feels a deep joy in her life. She is absolutely dedicated to dance and is constantly training to keep her body in peak physical condition. Joy is ready for each kind of sacrifice in the name of ballet art.

Where ballet is an obsession of self-discipline, Joy’s faith in Jesus is an opportunity to “love someone else as much as possible”. Joy sees her faith as a counterpoint to dancing.

In Russia, where she has danced, there is a tradition of deep Orthodox faith, which helps her to see the moments where God shows up to provide in extraordinary ways. Joy lives a life filled with God’s love.

The ballerina believes that when she has mastered a favourite role, God demonstrates his love for her, by making her wiser after the coping with the hardships.

Joy Annabelle Womack was born on 20 April 1994 in Beverly Hills, the USA. She has six brothers and two sisters.

In 2000, she began dealing with ballet at the Westside School of Ballet in Los Angeles. In the period 2006-2009, she trained at the Kirov Academy of Ballet in Washington, D.C. After her graduation, she moved to Russia and enrolled at the Moscow State Academy of Choreography. She graduated from it in 2012 with honours. Her pedagogue was Elena Aleksandrovna Bobrova.

She became the second after Anastasia Stevens American ballerina to graduate from a school of choreography in Moscow and was taken in the company of the Bolshoi Theatre. She also discussed conditions for signing of a contract with the Mikhailovsky Theatre in St. Petersburg, but finally, she went to an audition organized by Sergei Filin, artistic director of the Bolshoi Ballet. She worked one year there.

On 31 December 2012, she danced a solo part on the Main stage of Bolshoi Theatre, performing the role of the Spanish Doll in the ballet “The Nutcracker” by Tchaikovsky. On 20 April 2013, she performed in the cast of the corps de ballet in the spectacle “Ivan the Terrible”.

In spring 2014, she appeared in Kazan in the ballet “La bayadère” by Ludwig Minkus – a spectacle of the Musa Jalil Theatre. She performed the role of Gamzatti.

View the embedded image gallery online at:
https://www.operasofia.bg/en/news-and-events/item/7594-the-ballerina-joy-womack-in-the-role-of-kitri-in-don-quixote-on-the-stage-of-the-sofia-opera-and-ballet-12-may#sigProGalleria416f278a33
More in this category: « Statement of Acad. Prof. Plamen Kartaloff, Director of the Sofia Opera and Ballet, at the 6th annual meeting of the National Board of Tourism, 23 April 2019 at the Hilton hotel, Sofia Welcome on 5 May at 19 h – Eugene Onegin – 100 years on Sofia stage – belcanto.ru »
back to top