Statement of Acad. Prof. Plamen Kartaloff, Director of the Sofia Opera and Ballet, at the 6th annual meeting of the National Board of Tourism, 23 April 2019 at the Hilton hotel, Sofia 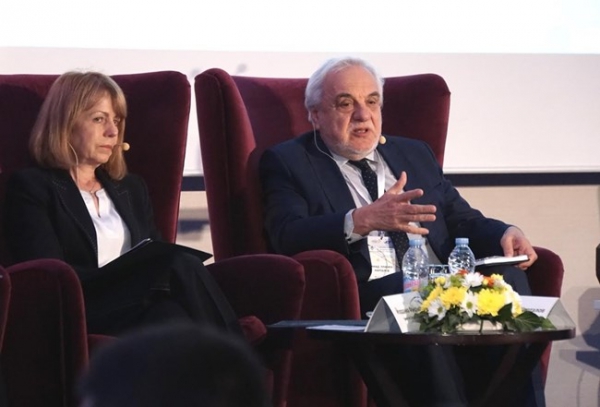 Acad. Prof. Plamen Kartaloff, Director of the Sofia Opera and Ballet, was present at the 6th annual meeting of the National Board of Tourism, which was organized with the collaboration of the Ministry of Tourism and Sofia Municipality, and its subject was “2019 – Year of Domestic Tourism, Investments and Innovations”. Maestro Kartaloff took part in the first discussion panel with subject “Destination – Sofia. Vision for the development of tourism in the capital till 2030. Congress, cultural, event, youth and festival tourism. Identity”, together with Nikolina Angelakova – Minister of Tourism of the Republic of Bulgaria; Yordanka Fandakova – Mayor of Sofia; Tsvetan Simeonov – President of the Board of Directors of the Bulgarian Chamber of Commerce and Industry; Konstantin Boyadzhiev – CEO of “Galaxy Investment Group”, member of the Board of Directors of NBT and Vasil Dimitrov – President of Bulgarian Festivals Association.

The Director of the Sofia Opera and Ballet emphasized that some of the first visioneers of opera tourism were two great composers. These are the Maestro of Italian revolution Giuseppe Verdi and the reformer and philosopher Richard Wagner. When Verdi was asked to what is due the success of his operas, he answered: “The theatre to be always full!” This is to say an audience, which travels all over the world. And Wagner said: “I am writing these operas of mine, but who will watch them?” At that time, 200 years ago, were founded over 170 Wagner Societies, the members of which travelled all over the world to see Wagner productions. One lady from San Francisco at the age of 96, whom the physician advised not to undertake such a long journey to Sofia, to hear and watch Wagner’s tetralogy, told him: “I am not going to listen to you and think about my diseases – I am setting out for Bulgaria, for Sofia. I don’t know where it is, but I am going at the Sofia Opera to see “Der Ring des Nibelungen”. This was an exceptionally moving event. I would like to thank the Mayor of Sofia, Mrs. Fandakova that then she covered with asphalt Vrabcha Str. Because the political parties, which penetrated there, are still there, in the entrance of 1, Vrabcha Str., didn’t notice the condition of the street. I made an effort to convince our power bodies to give one part of these premises to make a museum. When our guests come, to see the museum of the singing glory of Bulgaria. This didn’t happen. But Mrs. Fandakova knows that more than 900 tourists, who came from all over the world for the first Wagner Festival, arrived at one wonderfully asphalted street. And we were not ashamed that people would see the holes.

I would like to thank also Mrs. Angelakova, Minister of Tourism, who entered in our corporate culture. She was enthusiastic to support the Sofia Opera, when we had the creative courage to show our Wagner not only in Sofia, but in Germany too.

Academician Kartaloff underlined the importance of the cooperation of the Opera with Sofia Municipality and the National Board of Tourism in the context of the subject for the event and festival tourism. He pointed out that the potential of our first opera theatre is big in attracting of Bulgarian and foreign tourists.

View the embedded image gallery online at:
https://www.operasofia.bg/en/news-and-events/item/7586-statement-of-acad-prof-plamen-kartaloff-director-of-the-sofia-opera-and-ballet-at-the-6th-annual-meeting-of-the-national-board-of-tourism-23-april-2019-at-the-hilton-hotel-sofia#sigProGalleria64e76490fa
More in this category: « The phenomenon “Mamma Mia!” – The megahit with ABBA’s music returns for a two-month summer tour in Bulgaria - impressio.dir.bg The ballerina Joy Womack in the role of Kitri in “Don Quixote” on the stage of the Sofia Opera and Ballet – 12 May »
back to top