Don Juan in the course of time 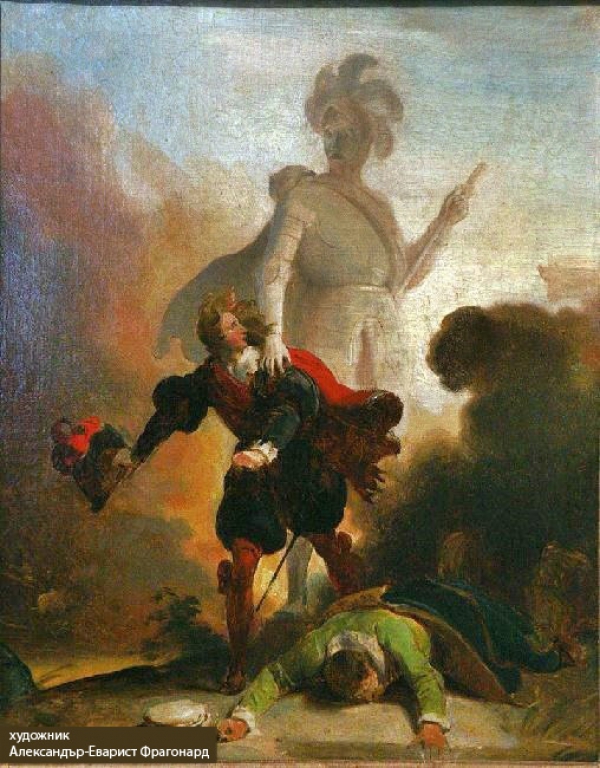 With all metamorphoses, which Don Juan underwent in works different in genre and plot through the years, he has turned from a character into a motif.

There are many versions of the story of Don Juan, but the main dramaturgical line remains unchanged in its sense: Don Juan is rich and as if frivolously devotes his life to lust. He is proud of his beauty and irresistible charm, which seduce all women. The character often repeats: “What a long term you give me!”. This is his way to show that he is young and that death is still very far – he has enough time to repent of his sins.

The beginning is set by the play “The Trickster of Seville and the Stone Guest”, published in Spain c. 1630 by Tirso de Molina (pseudonym of Gabriel Téllez). Don Juan was presented as an evil person, who seduces the women, thanks to his ability to fascinate with beautiful words, but also to conceal his true face. This is a symbol of his demonic nature – the devil is known for the fact that he adopts someone else’s appearance.

The play was written in the age of Spain’s Golden Century, but soon it was translated in other languages and was adapted in the context of other cultures and aesthetic trends.

Mozart’s opera “Don Giovanni” is maybe the most popular version, written after the well-known plot. It inspired works by Hoffmann, Pushkin, Kierkegaard, Bernard Show and Camus.

The first English version of “Don Juan” was “The Libertine” (1676) by Thomas Shadwell. The production of this play in 1692 included songs and dramatic scenes with music by Henry Purcell. Another well-known English version is Lord Byron’s epic poem “Don Juan” (1821).

In the film “Adventures of Don Juan” with the participation of Errol Flynn (1948), Don Juan is a reckless lover of feminine beauty, who is fighting against the powers of evil.

Situated in the present, the story is realized in the film “Don Juan DeMarco” (1995) with the participation of Johnny Depp and Marlon Brando, in which a mentally ill patient is convinced that he was Don Juan and he tells “his” story. The film “Don Jon” (2013) presents an attractive young man, whose addiction to online pornography is brought to main problem, and the director achieves a still stronger effect by exposing the consumer society through the image of the girlfriend of the main character.

Don Juan lives in the imagination of many authors and succeeds to travel in time and space, to pose questions and problems, to shock and excite.

Don Juan provokes us to ask ourselves how far extends the freedom of our desires and are we ready to pay its price.

Tweet
More in this category: « Nadia Krasteva: Let the beauty of music reach the depths of the soul of everyone, let it bring joy, blessing, goodness – by Olia Al-Ahmed, Bulgarian Telegraph Agency The Opera “Don Giovanni” by Mozart with premiere spectacles on 18, 19, 20 and 21 April at the Sofia Opera and Ballet »
back to top