The Opera “Don Giovanni” by Mozart with premiere spectacles on 18, 19, 20 and 21 April at the Sofia Opera and Ballet 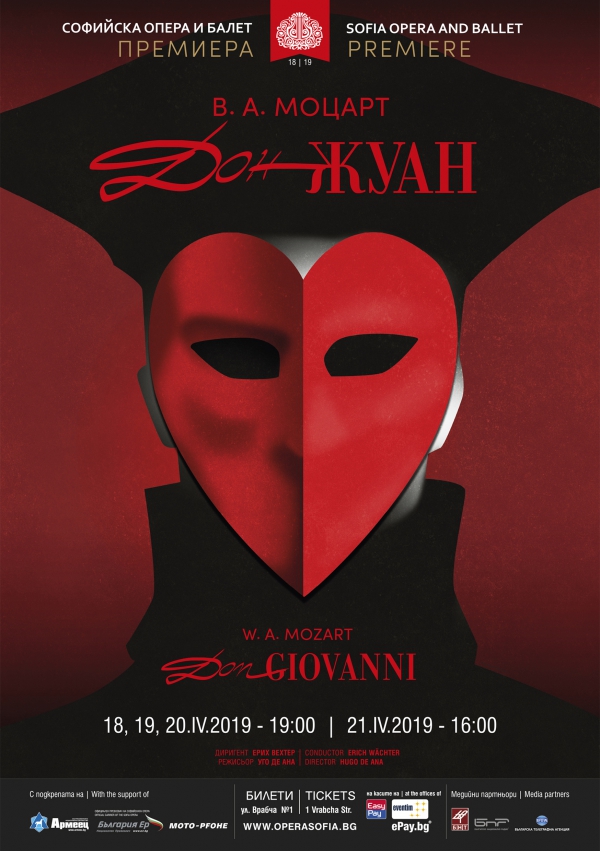 On 18 April 2019 the Sofia Opera and Ballet invites its admirers to the sixth premiere for the season. The new title in the playbill is the opera “Don Giovanni” by Wolfgang Amadeus Mozart. Opera in two acts, defined by the composer as dramma giocoso – a synthesis between the dramatical and the tragical, in which the spectacle’s stage director and set and costume designer Hugo de Ana promises to his audience to witness the feelings of the notorious conqueror of women’s hearts and adventurer Don Giovanni and of the people from his close circle.

This will be the next spectacle in succession on Sofia stage, which will be directed by De Ana, known already to the Bulgarian audience with his productions of the operas “Aida”, “Norma” and “Samson et Dalila”. The famous all over the world stage director and set designer produces spectacles in a number of opera theatres, among which La scala di Milano, Teatro dell'Opera di Roma, the opera houses in Santiago de Chile, Madrid, Barcelona, etc. He is winner of a series of awards for best stage director and of distinctions for set design and costume design.

For their premiere on the stage of the Sofia Opera and Ballet they work together with the world-known opera prima Anna Tomowa-Sintow, who performed some of the most memorable characters in the operatic art – Norma, Tosca, Turandot, Donna Anna in Mozart’s opera “Don Giovanni”. The work with the artists is a part of the intention of the Director of the Sofia Opera and Ballet – Academician Plamen Kartaloff, to create a studio, in which the singers to be able to improve their skills by borrowing experience from eminent opera singers.

The opera “Don Giovanni” by Wolfgang Amadeus Mozart is considered for the first great example in the history of music, of an opera, in which skilfully are interweaving dramatic and comic situations. Mozart himself defined this work of art of his as a merry drama, in the basis of which stands the story of Don Giovanni – a seducer and conqueror of women’s hearts. A story, which has given the occasion for the creation of many literature and music works, but depicted the best way according to the critics namely in Mozart’s opera. The work on its creation the composer began in May 1787 in Prague, together with the librettist Lorenzo Da Ponte.

It was completed entirely in September the same year, and a month later – in October, was the premiere, which passed with incredible success in Prague.

An interesting detail around the opera “Don Giovanni”, often mentioned when one talks about its creation, is that the overture to it Mozart wrote in the day of the premiere. This, however, didn’t hinder the critique to be unanimous that this was one of the composer’s most beautiful opera overtures.

In Sofia “Don Giovanni” was performed for the first time in 1930. Conductor was Hermann Stange, and stage director was Nikolay Vekov.

The tickets for the premiere on 18 April 2019, as well as for the next spectacles on 19, 20 and 21 April, are already in sale at the Ticket Office of the Opera at 1, Vrabcha Str., as well as at the ticket offices of EasyPay in the whole country, in the net of eventim.bg and in internet on operasofia.bg.