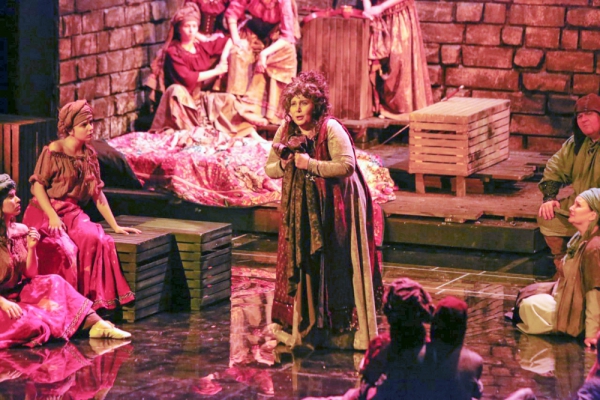 February was the month of “Il trovatore” for the Sofia Opera. The director of the national company Plamen Kartaloff, this time too, on the principle every year in its repertoire to put a new production of the genius Giuseppe Verdi. And he invited his Italian colleague Filippo Tonon to transfer his concept of “Il trovatore” on Bulgarian stage. This way was born the spectacle, performed in several premiere evenings (from 23 to 28 February) by different Italian and Bulgarian soloists in front of the hall, overfilled with music lovers.

“Il trovatore”, staged by Filippo Tonon, is exceptionally beautiful. During the last decade, we were witnesses of not just several bizarre sets, but as if for the first time we immersed ourselves in a real medieval milieu with its characteristic elements, colours and lights. Tonon not only directs the spectacle to Verdi’s music and Salvadore Cammarano’s and Leone Badare’s libretto, but he creates an entire tragical and romantical idea of the age, working personally on the set design, as well as on the artistic lighting. It was completed by the costume designer Christina Aceti, the conductor Laurent Campellone and the singers, to who we owe the emotion from our well-known favourite arias, many-voiced and chorus performances.

The evening on 26 February was reserved for only Bulgarian soloists. It is luck to listen in one spectacle singers with impressive international career like the tenor Kamen Chanev (a tender, moving Manrico) and the baritone Kiril Manolov (a ruling the stage Count di Luna), the company’s prima-donnas Gergana Rusekova (an impressive Azucena) and Gabriela Georgieva (a suffering Leonora), their partnering Bayasgalan Dashnyam, Svetozar Rangelov and members of the chorus. The spectacle was interrupted by “Bravo” for their best performances, and the finale – applauded on feet. Even the problem with the surtitles during the first part of the spectacle didn’t trouble the feeling of a feast. It’s a pity that in March there are no planned spectacles of “Il trovatore” on the playbill of the Opera. The audience will ask for tickets for sure.

The text was published in Issue 8/2019 of the Iconomist Magazine, which you can buy in the distributor’s net.

Tweet
More in this category: « EXHIBITION – 100 YEARS OF THE PREMIERE OF “EUGENE ONEGIN” IN BULGARIA “Il trovatore” by Giuseppe Verdi – the new premiere for February at the Sofia Opera – Opera by Giuseppe Verdi »
back to top