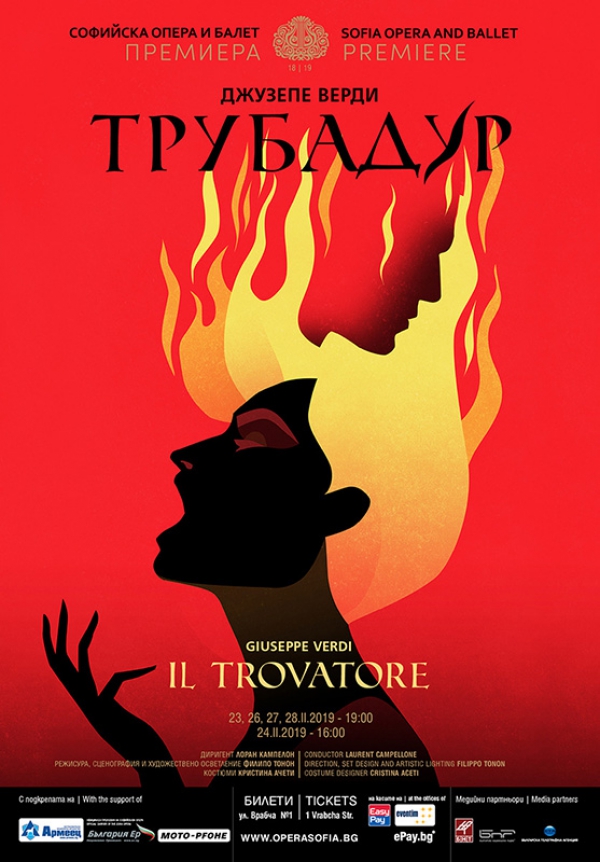 The Sofia Opera and Ballet invites its admirers to visit on 23 February 2019 the premiere spectacle of the opera “Il trovatore” – one of the most popular and most often produced up to this day on the world stages opuses by the composer Giuseppe Verdi.

“Il trovatore” is a story about passion, love, romantic, secrets, magics and desire for revenge. This is a narrative about the conflict between love, hatred and jealousy, which turn into a constant fight for superiority and destruction of the enemy, regardless of the price at which it would be achieved. The strictly and well kept secrets and the desire for revenge, especially when it turns into an aim for seeking and receiving of retribution for softening of the pain from the loss of a dear person, add to the messages, which carries the work that on the background of these complicated relations death is as if the only possible way out for the characters, but it doesn’t bring peace and humility, but a total ruin.

Giuseppe Verdi wrote the opera “Il trovatore” for only 21 days in 1853. For basis of the plot he used the drama by the Spanish writer – romanticist Antonio García Gutiérrez. The libretto was written by Salvadore Cammarano and Théophile Gautier.

For the first time the opera was presented on 19 January 1853 at Teatro Apollo in Rome with great success, but at unusual circumstances, caused by a flood in the Italian capital on the day of the premiere, which, however, didn’t hinder the spectators to look still early in the morning for tickets for its favourite composer’s new work.

And to the comments after the premiere that the opera was gloomy, Verdi replied:

“Life itself is full of death, what more is there in it?”

Later the success of “Il trovatore” in Italy was repeated also at its presentation on the opera stages in Paris, London, St. Petersburg and other cities.

In Bulgaria it was performed for the first time in 1914, and fragments from the opera were presented still in 1891.

Author of the direction, the sets and the lights in the upcoming premiere on the stage of the Sofia Opera and Ballet on 23 February 2019 is Filippo Tonon, the costumes are by Cristina Aceti, and conductor of the spectacle will be Laurent Campellone.

The tickets are already in sale at the Ticket Box of the Sofia Opera and Ballet at 1, Vrabcha Str., through of the offices of EasyPay in the country, as well as in Internet at: operasofia.bg and in the net of eventim.bg.