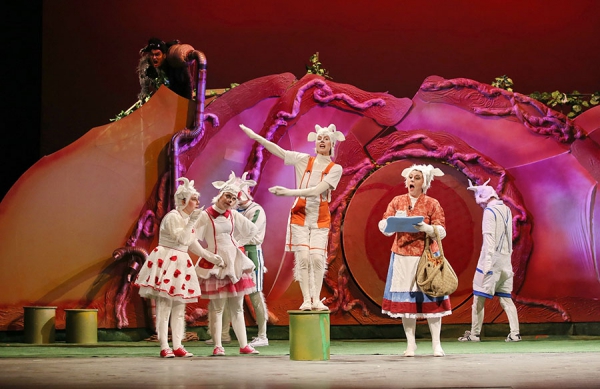 A few hundred little spectators and their parents experienced together with many emotions the premiere of the musical for children “The Wolf and the Seven Little Kids” by Alexander Wladigeroff at Sofia Opera and Ballet. From the beginning to the end of the spectacle the hall resounded with applauses, cries of joy or anxious sighs. The classic fairy-tale by Brothers Grimm, familiar to so many generations of kids, provoked unexpected agitations among the spectators – some of them worriedly refused to enter because of the Big Bad Wolf and long persuasions were necessary for them to dare to peep in the hall.

After that everyone – old and young – were fascinated by what happened on the stage. The dynamics of the plot was exalted by the multimedia and animation effects by Iliana Kancheva and most of all by the play of the Seven Kids. Their roles with pronounced pleasure were plaid by Anna Gavrailova, Gergana Dudina, Rada Nosikova, Rositsa Indzheva, Krasimir Kozhuharov, Stefan Sahatchiev and Nadya Koleva. Mother Goat (Blagovesta Mekki-Tsvetkova), the Owl Uhu-Buhu (Ilia Iliev) and the Nightingale (Atanas Yonkov) successfully contributed to the general high mood. Even the appearance and the underground activity of the Wolf (Nikolay Pavlov) were met without fear, but with expectation of the inevitable just retribution. In the libretto of the director of the musical Yulia Krasteva the belief in the power of good and in the possibility even the evil to be reformed leads to more different and unexpected end. The bad and greedy beast instead of being sent in the next world is sent to the... zoo. This transformation in the fairy-tale appealed to the spectators, who with desire took part also in the jokes addressed to them during the whole spectacle. Almost the entire hall in choir answered to the popular Bulgarian riddle “Long Dimo without bones pays a visit to heaven” – astonishing in the times of mobile phones, tablets and other mobile devices which even during the spectacles were flashing around their owners.

The set design by Pavlina Eusterhus – apparently economical, but completely enough and without drawing away the attention from what happens on the stage, was successfully complemented by the beautiful costumes of our guest from Slovenia Stanka Vauda. Dynamic and pleasant was also the choreography by Maria Lukanova. For the general high mood considerable was the merit of the orchestra with conductor Stefan Nedyalkov, and with its work the entire team presented a double present – the newest premiere for the audience and the joy from success – to the director Yulia Krasteva. With this spectacle she celebrated also her birthday.