Vera Petrova before FAКTI: The opera "The Saints Cyril and Methodius" is a transparent, airy, mystical and poetic reality of the life and work of the brothers

The work is very spiritual and requires another, different disposition. It does not allow the usual operatic turmoil, given the theme to which it is dedicated, namely the life of the holy brothers Cyril and Methodius and their disciples.

Vera Petrova grew up in a family of musicians. Her musical training began at an early age. She studied piano, all theoretical musical disciplines and acting skills. She graduated in directing and art management at the New Bulgarian University. The main role in her professional has the director Plamen Kartaloff. In 2006, she won the prestigious scholarship for creative exchange at the famous Wagner Festival in Bayreuth, Germany, and in the 2007-2008 season she worked at Covent Garden as an intern director. Her professional engagements began at the Stefan Makedonski National Music Theatre, as an assistant director of the productions “Die lustige Witwe” by Lehár and Mozart's “Die Entführung aus dem Serail”. Since 1996, she has been working at the Sofia Opera and Ballet. Initially, she was Plamen Kartaloff's assistant director in some of his most successful productions from this period – "Il Barbiere di Siviglia" by Rossini, "Don Carlos" by Verdi, "Turandot" by Puccini, "Mona Lisa" by Ponchielli and large-scale outdoor production of "Prince Igor" from Borodin. Since 2002. she has been a full-time director with eye-catching original solutions for opera concerts, adapted versions of productions. Since November 2008, Vera Petrova has been Deputy Director of the Sofia Opera and Ballet.

- Mrs. Petrova, the Sofia Opera is about to premiere an exceptionally interesting and thematic Opera-oratorio "The Saints Cyril and Methodius" by Jivka Klinkova. Tell us a little more about this opera?

We must specify that this work was presented for the first time in 2021 for 24 May on national airwaves.

Loyal to its mission, Sofia Opera and Ballet sets and presents, in its repertoire, a large number of Bulgarian opera titles. Over the years we have realized concert performances of many wonderful works, stage versions of "Borislav" – G. Atanasov, "Tsar Kaloyan", later "Yana's Nine Brothers" – L. Pipkov, which we presented at the Bolshoi Theatre, last year an opera-oratorio by Jivka Klinkova, based on texts by Venko Markovski "The Saints Cyril and Methodius”, and this year, after many years of preparation and thought, we realized "Chatterers" – L. Nikolov, on the occasion of the hundredth anniversary of the author's birthday.

The opera-oratorio by Jivka Klinkova, based on a text by Venko Markovski "The Saints Cyril and Methodius" falls into the realm of a beautiful poetic-musical journey – a dream about the life and devotion of the two brothers and their disciples. Immersed in the memories of the end of his life, Cyril leads us in a mystical story about the mission to which he dedicated his entire life.

Jivka Klinkova has been working on this work for many years and in very close collaboration with the author of the texts Venko Markovski. She brilliantly captures the depth and vastness of the rich verse of the "Sacred Legends", intertwining it with its unique musical form. This provoked us, together with Zhorzh Dimitrov, the multimedia artists from Electrick.me, the choreographer Anna Pampulova, the chorus master Violeta Dimitrova, our excellent soloists and the co-repetiteur Agnes Dankova to look for the textual links in "Sacred Legends". The coded symbols and pictorial poetic abstractions of Venko Markovski, colored by the unusual and deep music by Jivka Klinkova, found their visual expression in a transparent multimedia and musical journey. We worked very thoroughly on the pictorial expression, as this is an opera that required attention in the reading, given the huge musical training that Jivka Klinkova herself has carried out as research and work in creating the work. She herself worked a lot on the coded symbolism of the Glagolitic alphabet.

For us, the entire production team, along with the orchestra, the chorus, the ballet and the technical team of the opera, was an unusual experience the creation of this title.

- When are the premiere spectacles?

- The spectacle will be presented on 22 May at 16.00 h. on the eve of the holiday, so that admirers who have long expressed a desire outside Sofia to enjoy the spectacle live.

- The libretto of the opera-oratorio "Cyril and Methodius" is based on poetic texts from "Sacred Legends" by Venko Markovski. How do you, as a director, manage to weave poetry into the overall musical plot of the opera?

- As a poetic expression, Venko Markovski carries the complex philosophical, multifaceted and multilayered palette of an opera librettist of Wagner's rank. He creates unusual phrases, special definitions that sometimes shock you, sometimes shake you, but never leave you indifferent. He arranges the verse with incredible style and unusual, I would say musical rhythm, which has been created for decades, with great care and responsibility. This was the reason we allowed ourselves to use his verses as connecting texts between the scenes. Nothing else could emphasize the dream in which Jivka Klinkova immersed her main characters, as she makes it very personally engaged and at the same time the epic poem-creation of Venko Markovski. For us it was an experience to read the whole "Sacred Legends", although Klinkova used as a basis only those legends that relate to the holy brothers. 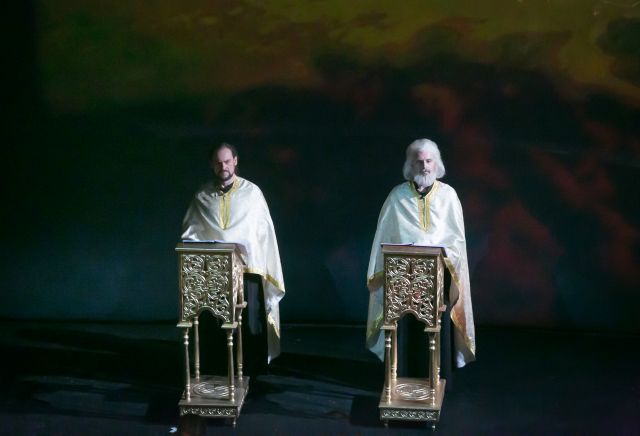 - What do you think is innovative about this Opera-oratorio? What will captivate the spectator?

- Our spectator will be immersed in a transparent, airy, mystical and poetic reality that attracts the spectator's attention through elegant multimedia in the text and musical narrative of the life and work of the two brothers. I would like to emphasize that the goal is to achieve an intimacy despite the many participants, which will make us think, go inside ourselves and at the same time feel our national value, remembering that we had rulers like Prince Boris the First. Rulers who looked far into the future, who left a lasting mark, and not only, in Bulgarian history.

- Was it difficult for you to work as a director in this particular production?

- The work was very difficult, in the sense of high responsibility to the authors of this work. We needed a lot of attention to discover, preserve and emphasize the intransient elements in the lyrics and music, without staging intrusiveness. We hope we have achieved this task.

- What will you tell us about the scenography, the costumes and the other backstage piquancy?

- The work is very spiritual and requires another, different setting. It does not allow the usual operatic turmoil, given the theme to which it is dedicated, namely the life of the holy brothers Cyril and Methodius and their disciples. The scenography had to support the multimedia pictures, to give the impression of something unreal. The costumes of the historical characters are in a stylized version, and the costumes of the chorus are chosen out of time to emphasize the intransience of the theme. In the same way is the reader who reads the poems by Venko Markovski in modern times, from the point of view of the audience.

- The presentation of this significant work is in honour of the 40th jubilee of the proclamation of the Holy Brothers Cyril and Methodius as co-patrons of Europe by Pope John Paul II. What accent did you put in the production on this occasion?

- The recognition for Jivka Klinkova and Venko Markovski is great and it happened before we to set the work entirely in Bulgaria in 2021. It is an assessment of two valuable authors, which we should properly assess from today's perspective. There is a whole picture in the work, which takes place in Rome, dedicated to the debates on the recognition of the divine service and the writing, created by Cyril and Methodius, but it is part of the scenes – memories of Constantine Cyril. Special emphasis is not sought, because Klinkova herself clearly enough expresses all kinds of chants – orthodox, Gregorian, in some places folkloric too – of the author. 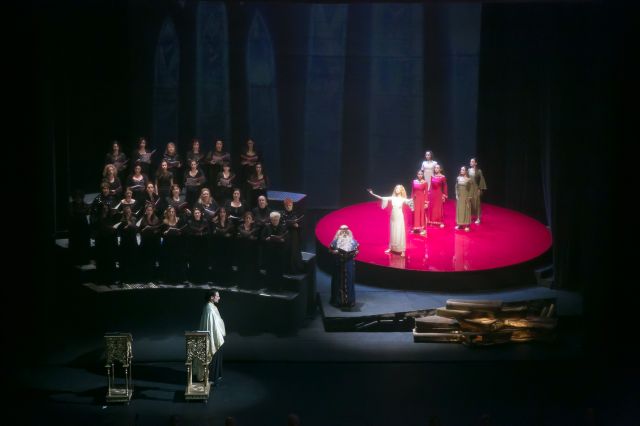 - As far as I know, Pope John Paul II awarded Jivka Klinkova’s work with a special diploma. How exactly do you think the author deserved this great award?

- With all her work, with the approach through which she presented the lives of the two brothers and their disciples, with the choice of "Sacred Legends", with the attraction of an epic poet of the rank of Venko Markovski.

- As a director, what attracted you to this work?

- I think I shared all the challenges and points of interest above.

- Would you reveal the surprises hidden in the plot?

- There are many things that, as spectators and listeners of this musical-textual fusion, will make us think about HERE and NOW, and how insightful and modern the two authors sound.

- Which artists take part in the production?

- In the lead roles are: Biser Georgiev, in the exceptionally complex vocally, as well as emotionally created part of Cyril, Atanas Mladenov – Methodius, in the role of the brothers' mother – Gergana Rusekova, the father – Veselin Mihaylov, among the key roles should be listed Daniel Ostretsov, Diana Vassileva, who with the ballet ensemble under the creative work of Anna Pampulova created an exquisite symbolic canvas of the candidate brides of Cyril. The costume designer of the overall picture is Hristiana Mihaleva. We should not miss Dimitar Stanchev, Krasimir Dinev, Stefan Vladimirov and in the role of the Reader - contemporary Nikolay Petrov. In the roles of the disciples are Petar Buchkov, Emil Pavlov, Georgi Dzhanov, Angel Antonov, Nikolay Voynov. Angel Hristov will remind us the image of Prince Boris the First.

I would like to emphasize specially the great consulting work of Prof. Plamen Pavlov, who was inseparable from us in the creating the sequence, the chronological accuracy, in emphasizing certain texts of Venko Markovski, he himself is a huge connoisseur of the work of Venko Markovski. 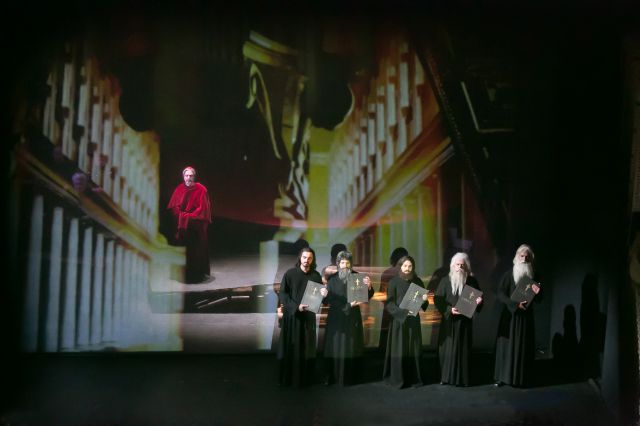 - Your wish to our readers and connoisseurs of opera?

- Each one of us in the production team passed through many personal difficulties and the challenge to meet such artists as Klinkova and Markovski, who worked in depth and years long, with dedication to his work. In today's, often superficial and running time, in which we pay no attention to anything, the two authors remind us that the word is a symbol of our inner life, of the message, of our spirituality, of the future, which we must carefully plan.

In no case, without vulgarizing our language, covering it with a set of loan words. We need to think before we pronounce the word, because both the written word and the spoken word have a special vibration. This is what Jivka Klinkova and Venko Markovski coded for all of us years ago. It's time to think! 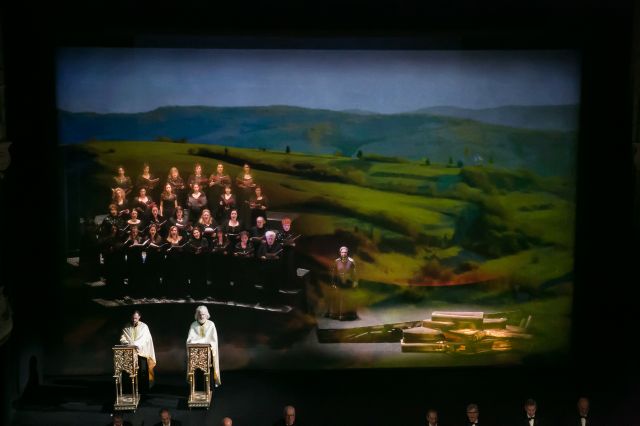