Colorful and modern Vazov's "Chatterers" sing at the Sofia Opera

The contemporary quarrels between the big countries in the world were interweaved in an original way in the opera "Chatterers", staged at the Sofia Opera by the director Acad. Plamen Kartaloff. The premiere of the musical work by the composer Lazar Nikolov based on the novel of the same name by Ivan Vazov took place in Sofia on the eve of the National Holiday of Bulgaria – 3 March. This is why the long-awaited spectacle began with the anthem of the republic, and then scenes from the Revival were opened to the audience, but transferred to the modern era.

Seven years after the Liberation from Turkish yoke, Ivan Vazov turned to the epoch of the Revival to tell with humorous and ironic devices the life of his fellow citizens from Sopot, still inhabiting the enslaved territories of Bulgaria, which was then part of the Ottoman Empire.

The memorable images of colorful characters like Hadji Smion, Ivancho Yotata, Ivan Selyamsazat, Mironcho, Varlaam Koprinarkata, Varlaam’s Wife and Selyamsaz’s Wife and many others bring together all the characteristics of the guild society, in which freedom is so dreamed of by the chatterers, but they find themselves so entangled in their petty life dramas and fears that they do not have the time or courage to fight for it, so it remains a topic of conversation at the table. 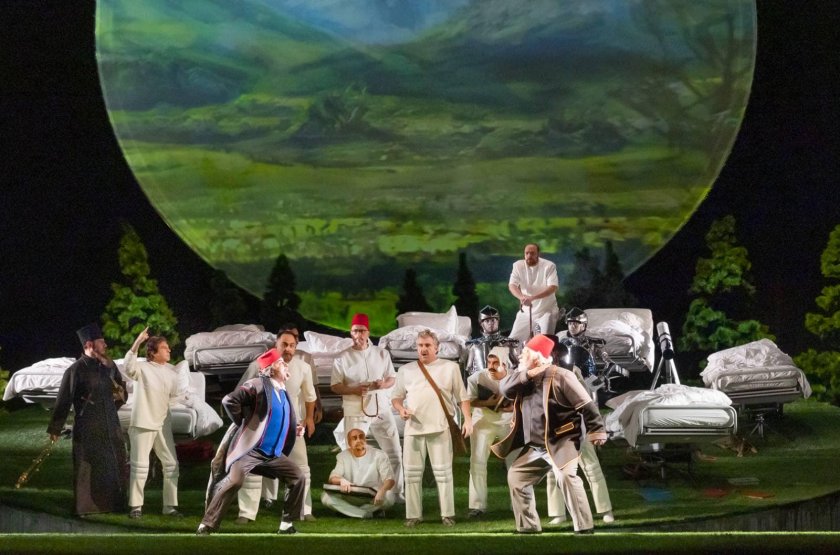 In Plamen Kartaloff's original, prophetic and psychological dramaturgy of "Chatterers" the action is transferred from the Dzhakovo Cafe to a luxury sanatorium among beautiful natural views, as Vazov's characters are placed in an interesting way in a kind of bridge between past and present. Instead of wearing hooded cloaks, the "new" chatterers enjoy soft warm blankets from the modern SPA.

Thus, the director remains loyal to the spirit of Vazov's work, but also appeals to the contemporary spectators to make them think not only about the pre-liberation era, but also about everything that happens around us and with us in today's divided world.

In this 160-year journey from Ottoman Bulgaria to modern free Bulgaria, Maestro Kartaloff turned to the popular writer Georgi Gospodinov, under whose pen an analytical text about the "Chatterers" and contemporary Bulgarians came out. And Malin Krastev and Mihail Bilalov read this text, thus helping today's spectators to orient themselves better in Vazov's "Chatterers".

Someone will ask – is this necessary? Such a directorial technique is especially needed for the younger spectators, so that they can immerse themselves not only in that Revival era, but also to understand it and, hopefully, to rediscover it for themselves. 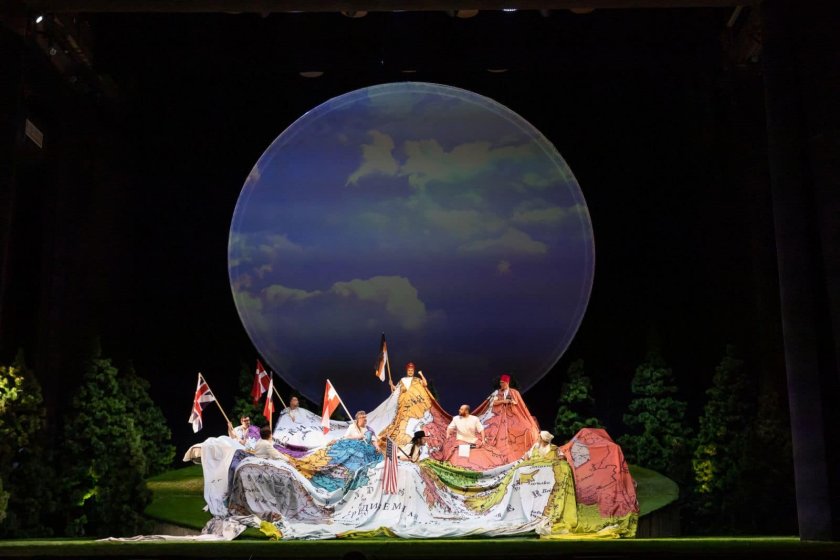 It was namely this era that Lazar Nikolov recreated 91 years later, when he created the opera of the same name in 1971. Still then, he turned to the director Plamen Kartaloff with a request to stage it. This request has been waiting for more than 40 years, and today it is already a fact. "Maybe then I wasn't mature enough for this music. Maybe I was scared and didn't feel like doing it. At that time, I had only done Pipkov, because I am a Pipkovist. But Lazar Nikolov very delicately told me that he wanted a meeting with me – to look at the score. I don't know what was rising in front of me, but I didn't continue the conversation. Maestro, I apologize to you. Now I am mature enough for your music. Thank you", frank was Maestro Kartaloff. The staging of "Chatterers" is a sign of respect for the composer on the occasion of 100 years since his birth. 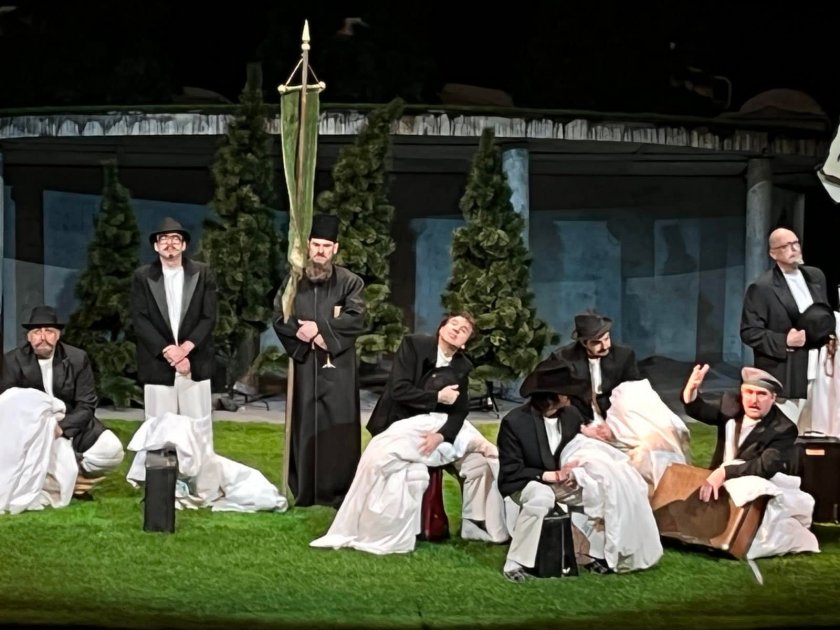 To the talent of Vazov and Nikolov, the Sofia Opera and Ballet added that of the artist Boris Dimovski, whose caricature turned into a poster of the production. And his drawings became part of Sven Yonke's scenography filled with a lot of symbolic.

Part of the spectacle’s impressive vision is the rotating elevated stage, which sometimes turns into a sanatorium, sometimes into a Revival house or an old times street, and above them shines a large globe, in which we look at ourselves – maybe because, as Acad. Plamen Kartaloff shares, we are all chatterers and every one of us will find something of himself in the thoughts, emotions and actions of this "gallery of types and customs of Bulgarians in Turkish times", according to the description of the Patriarch of Bulgarian literature. And this proves once again that the modern reading of Lazar Nikolov's opera is not only attractive, but also an expression of mastery, originality and ingenuity on the part of the director. Because it is easy to stage the "Chatterers" in that era and in that way of life and environment, but the more interesting and bigger challenge is to see how they would fit into the present. 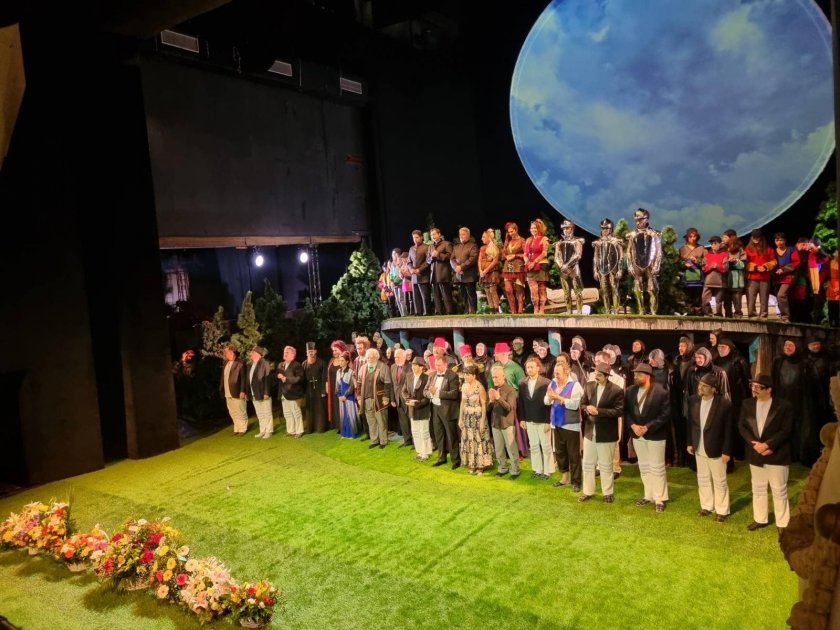 And the characters of the opera, clarifying the Eastern question and whether Russia will declare war on the Ottoman Empire to liberate Bulgaria from the Ottoman yoke, will make the contemporary spectator wonder if today we wholeheartedly and sincerely defend our freedom and independence. And whether they are ready to proudly raise their heads and remove the slave fez from their heads, or is it more convenient to hide under it and wait for someone to liberate them.

It is not by chance that the chatterers are wondering which way to take – to Europe, to America, to the Balkans, on the way to God" or to go where the inscription reads "The road is under repair".

" Isn't the world of characters a mirror of the meaningless chatter of absurd characters? They are frozen in reflection in their time, but also insightful into the future of events that they expect others to walk the path to and do. They do not act, they always rethink in hyperbolic fantasy everyday ridiculous events, have fun and try to be brave, but they are cowardly and hiding from the consequences of quarrels with the authorities. The pessimism of the characters is at the same time fun in the comfort of slavery, in which they live undisturbed, even happily. This leads them to the refuge of a timelessness, in which they will always be eternal and existing in perpetuum mobile. Perpetuum-mobile chatter, perpetuum-mobile quarrels and scandals. They play a game that has no end.", shares his directorial concept Plamen Kartaloff. 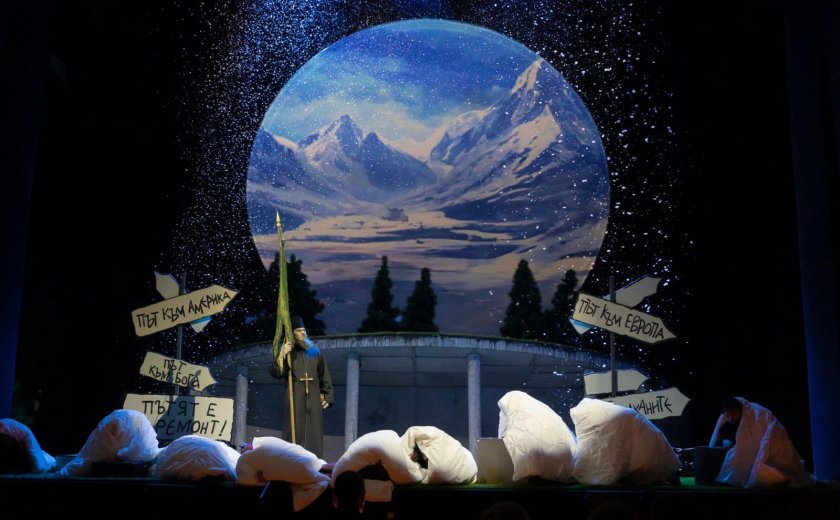 "If the Iliad starts from that devastating wrath of Achilles, then this Bulgarian "seditious propaganda" starts from the wrath of the Tariliom and the Selyamsаz" because of an old quarrel over one spout, bequeathed by their fathers". Such are our quarrels, such are our Iliads", reasons Georgi Gospodinov through the voice of Malin Krastev.

" Still, Vazov is merciful. What Botev will cut off sharply - And you ... you are idiots!, Vazov will tell us through the funny. His small, often sympathetically confused characters are torn between the Eastern Question and the coloured pants of Varlaam's Wife. But he can't stay with the warm humor and save the satire and the bitterness", the writer thinks. And he is absolutely right when he says that "If we really want to understand what happened and what did not happen, especially what did not happen during the past Bulgarian century and a half, then part of the answer lies right here, in "this gallery of Bulgarian types and customs". 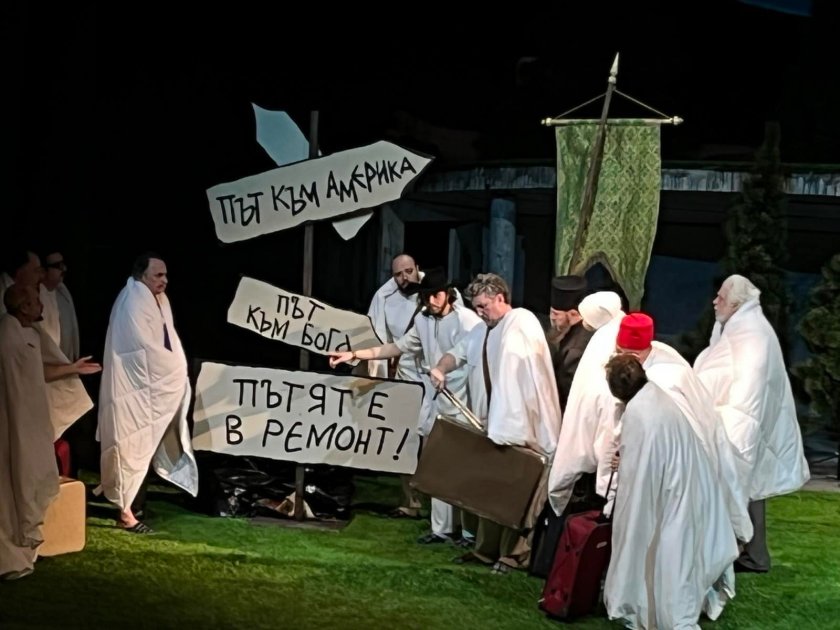 Recent events in the world and the sharp confrontation between Russia and the United States over Moscow's war in Ukraine also find a place in the spectacle, making it even more relevant. Although the production itself was conceived long before the conflict and the rehearsals began still at the end of last year. In the end, after the chatterers unfold the map of Europe from the middle of the 19th century, by them appear heavily armed Uncle Sam and a matryoshka doll, from whose backs protrude fighters. And the matryoshka doll is girded with ammunition and submachine guns – an obvious allegory of today's dramatic events in Europe. As a sign of sympathy with the Ukrainian people, the Sofia Opera joined the world initiative to project the Ukrainian blue and yellow flag on the curtain before the performance.

Even spectators, who are not musicians, will feel that Lazar Nikolov's opera is exceptionally complex in performance and is a real challenge for the talent of every conductor, orchestra, soloist and chorus. The orchestra did an amazing job with this so unusual, complex and fascinating musical work.

The team of the Sofia Opera under the direction of Plamen Kartaloff and under the conducting of Zhorzh Dimitrov and Boris Spasov undoubtedly proves that it is up to par and undoubtedly deserves the long applause, with which the first spectators of the opera "Chatterers" gave the musicians during the premiere spectacle on 2 March. 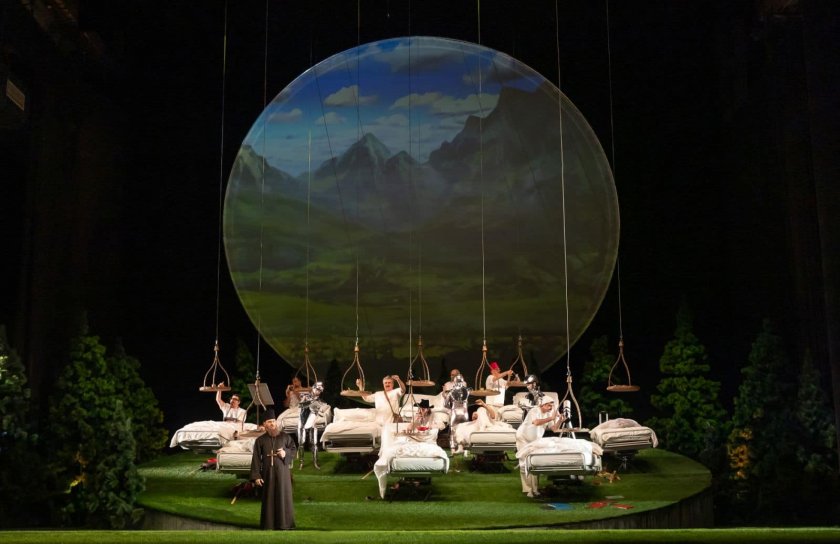 Reinaldo Droz, Daniel Ostretsov and Rosen Nenchev are in the roles of Church Singers, Stanislava Momekova, Aleksandrina Stoyanova-Andreeva, Vesela Yaneva = of the Gossips, and dressed as characters from "Star Wars" Aleksandar Georgiev, Georgi Dzhanov, Kalin Dushkov enter the personages of medics, who take care of the chatterers in the sanatorium. 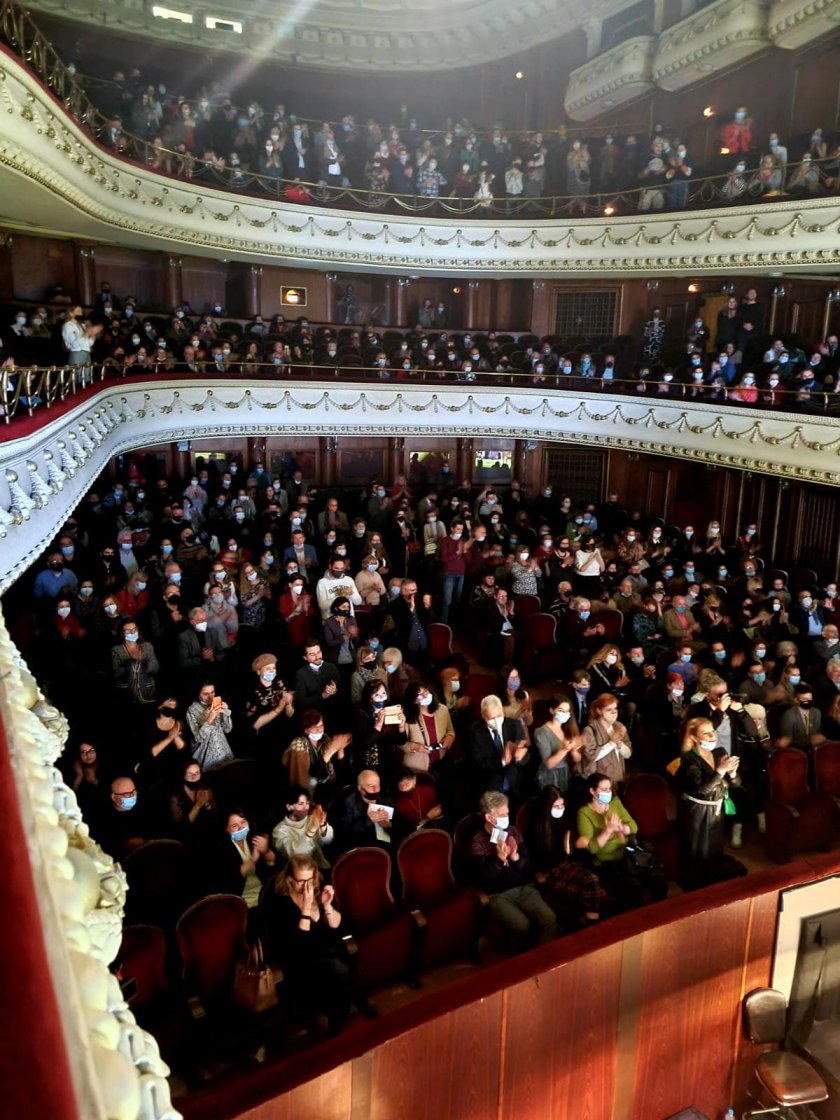 "For a long time I have not enjoyed such an accurate, sharp and artistically motivated satire! To make a combination of a classical work by Ivan Vazov and the music by one of the most modern composers of our century, like Lazar Nikolov, and to obtain an exceptionally modern sounding and looking satire, is a great artistic achievement", commented after the premiere the journalist Kin Stoyanov, who is the son of the great satirist Radoy Ralin.

"For me, this is an unexpected, exceptionally original interpretation of Vazov's "Chatterers"! I appreciate very much the fact that the work on the spectacle started long before today's events and yet its message is more than relevant, given what is happening today! With this production maestro Plamen Kartaloff shows that he can always surprise us with his amazingly accurate findings and artistic messages! This production is a real cultural event!", is the opinion also of the cinematographer and producer Dimitar Dereliev.

According to the public figure Nevyana Malcheva, the message of this spectacle sounds amazingly relevant. "Maestro Kartaloff seems to be a prophet, because the concept and ideas that are woven into the artistic narrative, surprisingly exactly coincide with what is happening today in our country and around the world! This is how a harmonious combination was created between the authorial dimensions of Vazov from his time and the director’s visions, transferring the manners and customs of the past to the essence of our time! The spectacle requires a comprehensive reflection on the permanence of human aspirations and customs in our people's psychology!", shared her enthusiasm after the premiere Nevyana Malcheva.

"Today we enjoyed both the innovative music of the composer Lazar Nikolov, which is emblematic for its time, and the innovative ideas and artistic dimensions in the concept of maestro Plamen Kartaloff", commented also Stanislav Pochekanski, President of the Union of Bulgarian Musicians and Dancers. " What is contagious for the audience today was the enthusiasm and inspiration with which the artists performed their roles wonderfully and with which the orchestra handled this polyphonic and original work so brilliantly! Today we had the chance also to enjoy the original and so melodious speech of Vazov! This spectacle is an unforgettable experience that is worth seeing by every music connoisseur! I hope this unique spectacle stays on stage longer", expressed he the wish also of the other impressed spectators.

And really, Plamen Kartaloff's "Chatterers" are an unmistakable barometer of our reality. In honor of the spectacle Sofia Opera published a special program brochure with rich photographic material from the production, through which the spectators can learn more about the life of composer Lazar Nikolov, the history of the creation of the opera "Chatterers" and the director's conception of Plamen Kartaloff.

The next dates, when you can laugh with "Chatterers" at the Sofia Opera or laugh at yourself, are 4, 6 and 22 March. And everyone will feel for himself whether for him the "chatterers" are "they" or "we".