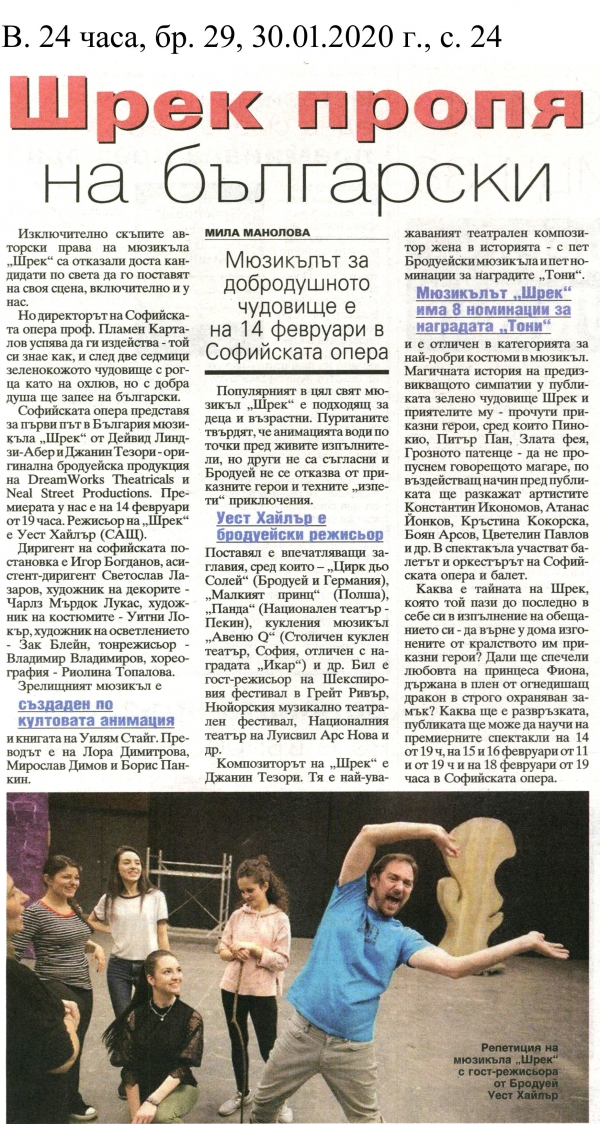 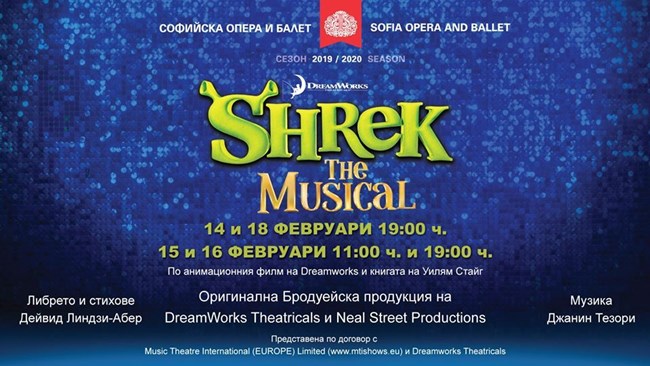 The exceptionally expensive copy rights of the musical Shrek have declined quite a lot of candidates to stage it on their stage, including in Bulgaria.

But the Director of the Sofia Opera Acad. Plamen Kartaloff managed to obtain them – he knows how he did it, and after two weeks the ogre with green skin and tentacles like of a snail, but with good soul, will start singing in Bulgarian.

The Sofia Opera presents for the first time in Bulgaria the musical “Shrek” by David Lindsay-Abaire and Jeanine Tesori – original Broadway production by DreamWorks Theatricals and Neal Street Productions.

The spectacular musical was created based on the cult DreamWorks Animation and William Steig’s book. The translation is made by Lora Dimitrova, Miroslav Dimov and Boris Pankin.

The popular all over the world musical “Shrek” is appropriate for children and adults. The puritans claim that animation heads up in scores compared to live performers, but others don’t agree and Broadway doesn’t give up on the fairy-tale characters and their “sung” adventures.

The composer of “Shrek” is Jeanine Tesori. She is the most respected female composer in the history, with five Broadway musicals and five Tony nominations.

The musical “Shrek” has 8 Tony nominations

and is distinguished in the category for Best Costume Design in a musical. The magical story of the evoking the sympathies of the audience green ogre Shrek and his friends – famous fairy-tale characters, among which Pinocchio, Peter Pan, Evil Queen, Ugly Duckling – let’s not omit the speaking Donkey, in an appealing way will tell before the audience the artists: Konstantin Ikonomov, Atanas Yonkov, Krastina Kokorska, Boyan Arsov, Tsvetelin Pavlov and others. In the spectacle take place the Ballet and the Orchestra of the Sofia Opera and Ballet.

What is Shrek’s secret which he hides to the last in himself, keeping his promise – to bring back home the expelled from their kingdom fairy-tale characters? Will he really win the love of Princess Fiona, hold captive by a fire dragon in a strictly guarded castle? What will be the denouement the audience will have the possibility to learn at the premiere spectacles on 14 at 19 h, 15 and 16 February at 11 and at 19 h, and on 18 February at 19 h. at the Sofia Opera.

Под снимката: Rehearsal of the musical Shrek with guest-director from Broadway West Hyler