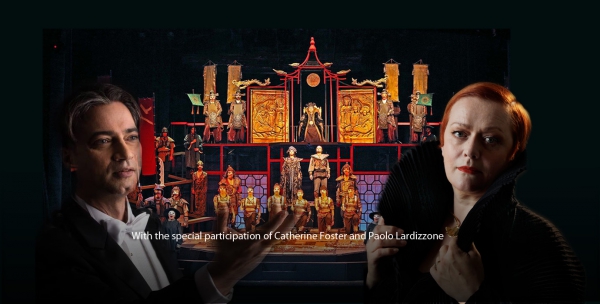 The world-known Catherine Foster and Paolo Lardizzone will be guest-performers on 15 December 2019 at 19 h. in the opera “Turandot”. The Sofia Opera and Ballet invites its admirers to the spectacle to feel the magic of Puccini’s music and immerse themselves in the legend about the Chinese Princess Turandot. This is a story about love and the peripeties, through which she passes.

In the role of the beautiful, but cruel Princess Turandot the Bulgarian audience will have the chance to see and hear one of the emblematic performers of dramatic roles Catherine Foster, known to the music lovers in Europe and around the world with her stage embodiments, mainly in Richard Wagner’s operas, presented on the stages of the Bayreuth Wagner Festival, in Hamburg, Berlin, Tokyo, Washington, Budapest, Amsterdam, etc. Catherine Foster was distinguished with an honorary scholarship by the Royal Birmingham Conservatoire for her presentation on the international stages, and in 2018 she received the Reginald Goodall Award by the London Wagner Society for her incredibly good performance of roles from Wagner’s operas.

In Sofia Catherine Foster’s partner will be the prominent Italian singer with international recognition Paolo Lardizzone, compared by the music critique to José Carreras, who will incarnate himself in the role of Prince Calaf – ready even to lose his life, but win the love of Turandot. Paolo Lardizzone is winner of a series of national and international awards. His career has passed through participations on the stages of the opera theatres in Europe and Asia.

In the spectacle the audience will see the artists Tsvetana Bandalovska, Tsvetan Tsvetkov, Angel Hristov, Atanas Mladenov, Nikolay Pavlov, Hrisimir Damyanov, Nikolay Petrov, who together with the chorus, the ballet and the orchestra of the Sofia Opera will make the spectators witnesses of the magic of “Turandot” – a work, defined as a symbol of the opera culture in Italy in the 20th century.

On the conductor’s stand will be Giorgio Proietti. Proietti conducted in 2001 “Turandot” with Ghena Dimitrova during the Japan tour of the Sofia Opera. The spectacle is produced by the stage director Plamen Kartaloff. His “Turandot” was welcomed in the Land of the Rising Sun. Great success it enjoys in Bulgaria too.

The first performance of “Turandot” was on 25 April 1936 in theatre “La scala” in Milan, when the audience heard the unfinished part of the opera because of Puccini’s death. One day later, the opera was performed entirely with the finale by the composer Franco Alfano.

Several months later, “Turandot” became part of the playbill of the Metropolitan Opera in New York, and since 1987 it has been part of the permanent repertoire.

Namely at its premiere on 14 December 1987 on Metropolitan’s playbill stood the name of the unrivalled Ghena Dimitrova, considered for one of the strongest performers of this part.

In Bulgaria the first production of “Turandot” was realized by the Sofia Opera in 1930 by the conductor Hermann Stange and the stage director Hristo Popov.

The tickets for “Turandot” are already in sale at the Ticket box of the Opera at 1, Vrabcha Str., as well as at the ticket offices of EasyPay in the entire country, in the net of eventim.bg and in Internet at: operasofia.bg.

Tweet
More in this category: « Yulia Krasteva: When art passes through human’s soul, it moves it – the Bulgarian National Radio LILI IVANOVA ABOUT “LES MISÉRABLES”: YOU WERE WONDERFUL »
back to top