PLAMEN KARTALOFF ABOUT THE PRODUCTION OF LES MISÉRABLES 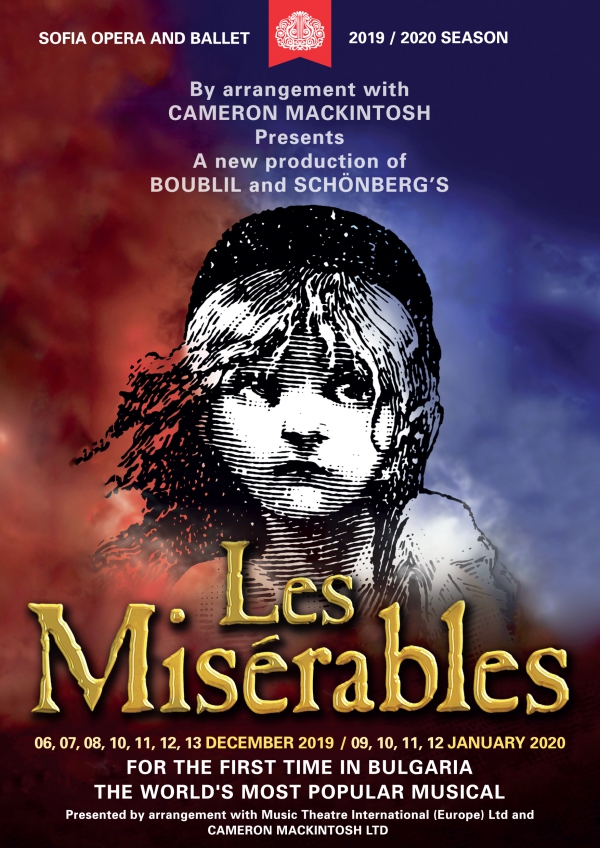 Stage Director of the production

“Every day one has to listen to at least one song, look at one beautiful painting and read at least one wise sentence.”

To these inspiring thoughts by Goethe, let’s acknowledge also Hitchcock‘s words, which came true, that from Victor Hugo’s novel “Les Misérables” would become a wonderful musical as well.

I would add also my wish: one has to hear and see the already produced in Bulgaria, on the stage of the Sofia Opera, really triumphing 35 years on all world stages phenomenal musical by Boublil and Schönberg LES MISÉRABLES.

Till now have watched it over 120 million spectators in 52 countries in 22 languages.

The art of the opera theatre is to serve every age with contemporary messages.

In this sense, I find so topical today the choice to produce on Bulgarian stage the musical LES MISÉRABLES.

The production on the stage of the Sofia Opera is a new revolutionary idea – together with the main repertoire with the great masterpieces from the world opera and ballet classic by composers from different ages.

Everyone today can recognize intimacy with many of the characters and the historical events from Victor Hugo’s novel, referred to each time, especially to modern times.

Love, hatred, compassion, nobleness, solidarity, revenge, protests against authority, in short, the revolutionary mood of the masses of people – always eternal topics, characteristic for every age.

This all kindles new zeal and rebellious spirit in the alternating layers of each political and social behaviour whatsoever.

In the director’s solution of the new production, I am looking to achieve a social and spiritual catharsis by the suggestions of the musical’s dramaturgy of genius.

The principle of kinetic action is in the dynamics of the scenes, the rapidity of the skilfully alternating scenes, the contrast episodes, the growth under way of the characters and the events, which follow them, the relations between the lyrical and the dramatical aspects and lines of constant tension.

I am convinced and I believe that the production gives a chance to the spectator from every age in the hall as if on his own and personally to take part in the action and to identify his emotions like similar to those of the characters from the stage.

Today also are valid with full force these states in circumstances and behaviour in our life. I insist specially to emphasize in the acting on the moving relationships between the lead characters – to be in a homogeneous synchronicity with the palette of the bright sensibility and power of the musical and the vocal images. The hymn of the students-rebels is in the name of freedom and progress.

The detailed working out in my work is in direction of portrait making through fine colours of the individuality of each artist. To create from the smallest to the biggest role is one of my most important tasks and dedicated attention, regardless of the enormous effort.

The ensemble power and emotional suggestions in the intimate, as well as in the monumental scenes, are the brand of my work as stage director, which is required for the stage recreation of this musical-phenomenon.

I had the intention and I tried this to happen still in 1987. Then the author of the license and chief producer Cameron Mackintosh gave me the rights for my own director’s version, immediately after the two world premieres in London and New York. This is to say, we had the rights to be third in the world. But we didn’t have the money …

It would have been a real historical and cultural event, “Les Misérables” to appear in Bulgaria, less than two years before 1989 – the new age of democratic revolution, which turned upside down the social, public and political life in Bulgaria too.

Tweet
More in this category: « The last for the season magical spectacle MAMMA MIA! On 15 September at 19:00 h at the Sofia Opera With the soloist's special participation in numerous opera productions at the Bayreuth Festival YUKA RASILINEEN in the role of Courvenal »
back to top