A magical suggestion, conquering the senses. In expectation of Georges Bizet’s masterpiece “Carmen” on 7 and 8 June on the stage of the Sofia Opera and Ballet 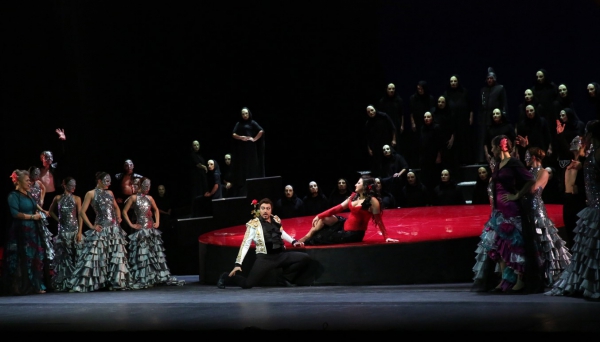 “How true, how indecent is everything!” Such was the pathos of the indignant critique about the first appearance of “Carmen” by Georges Bizet on the opera stage in the distant 1875 in Paris. Accused of immorality, Bizet didn’t stand the condemnation of his “indecent” character and soon after the premiere he left this world. Just five months after his death, “Carmen” was wildly applauded in Vienna.

Richard Wagner said that there had appeared someone – he meant Bizet, “who has ideas in his head”. Friedrich Nietzsche claimed that he knew the opera by heart and that he had listened to it at least twenty times. He exclaimed:

“Has someone ever heard more tragic accents on the stage! ...This work of art makes the human being perfect; one turns into a masterpiece oneself.”

Tchaikovsky predicted that up to ten years “Carmen” would be the most popular opera in the world. A masterpiece, a rare work of art which expresses the efforts of an entire age...”

Tchaikovsky’s predictions came true. Bizet’s masterpiece up to this day is the most often performed opera in the world. This rare work of art, expression of an entire age, lives not only on the opera stage, but it provokes the imagination of artists from the different arts. Every new production either a ballet, film version or theatre, inspires new life into the well-known female personage.

The return of “Carmen” on the stage of the Sofia Opera and Ballet in the past season was a real sensation. Bizet’s rebellious character Carmen flashed like a firework on the horizon of the world opera theatre with a bright, impressive insight of the stage director Plamen Kartaloff about this eternal personage.

In the new production of “Carmen” the stage director Plamen Kartaloff comprehends the messages of the character Carmen as a reflection of a tragic guilt from the ancient Greek drama. In the tragedy of the personality Carmen he is searching for an escape from the clichés accumulated in time. She is doomed to the power of fate. The fate which predetermines her life.

This Carmen makes us lose our breath, she grasps us and doesn’t leave us till the end of the witnessing of the character’s destiny. The choice of the stage director Plamen Kartaloff to look for motivation for the plot as a reflection of an antique drama, places this production beyond time. It conquers not only with the unusual interpretation of the well-known plot, but also with the magic frame by frame to unravel the threads of fate, the way it happens in the big film productions.

The Sofia Opera and Ballet expects its audience at one exceptional experience of the spectacle “Carmen” by Bizet on 7 and 8 June 2019.

On 7 June with the participation of Nadia Krasteva, praised by the critique as “Carmen No. 1” on the world stage, and with the excellent soloists of our first opera theatre Kostadin Andreev, Veselin Mihaylov, Ilia Iliev, Svetozar Rangelov, Atanas Mladenov, Tsvetana Bandalovska, Silvana Pravcheva, Tsvetelina Kotseva, conductor Zhorzh Dimitrov. At the second performance on 8 June Violeta Radomirska will appear in the role of Carmen and Daniel Damyanov, Radostina Nikolaeva and the above-mentioned artists from the first performance will take part.