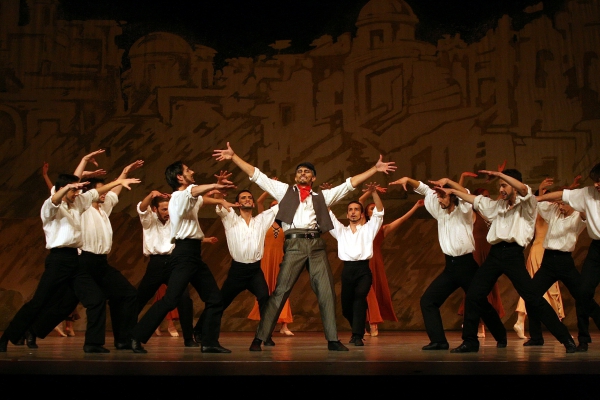 31 years elapsed from the ballet’s world premiere on 6 August 1988, on the stage of Arena di Verona

“Zorba the Greek” is connected most of all with the famous film with the participation of Anthony Quinn, and in the base is the book “Life and Times of Alexis Zorbas” (1943), with which started the career of the writer Nikos Kazantzakis.

The ballet production reached in popularity the literature and the film version. The world premiere of the ballet “Zorba the Greek” was in 1988 at Arena di Verona. Since then, the ballet was presented before more than 3 million spectators in 30 countries of the world. It gathered even an audience of 120 000 persons at the same time – at the open stadium in Rio de Janeiro.

Author of the music is Mikis Theodorakis – one of the most-eminent Greek composers, public figure, political and cultural worker, graduate from the Paris and the Athens Academies of Music.

Choreographer is the Russian Lorca Massine, born in New York. His teacher was his father, the well-known choreographer Léonide Massine. In 1960, he made his debut in his father’s company, and in 1964, together with his sister Tatiana Massine, he founded his own company. He has collaborated as dancer and choreographer with the French television, with Bejart’s 20th Century Ballet, the Monte Carlo Ballet Company, the New York City Ballet, Teatro Massimo in Palermo, La Scala di Milano, Teatro dell’Opera di Roma, etc.

The choreographer himself stated that he felt himself European, because he was a graduate in literature from the Sorbonne, his father owned an estate in Italy, and he was living in Greece. Lorca Massine, however, has never produced the ballet “Zorba the Greek” in Greece. His concept about the dance in the famous ballet is about a dance without abstractness. “The language has to be clear for the audience, to distinguish the difference between ballet and dance, between the dramaturgical language and the language of dance”, considers the stage director.

The ballet of Sofia Opera and Ballet was invited by the Greek Ministry of Culture to take part with “Zorba the Greek” in the cultural programme “2007 – Year of Kazantzakis”. The project was realized on the occasion of 50 years of the death of the great Greek writer.

Mikis Theodorakis’ and Lorca Massine’s ballet is being performed with great success all over the world.

In Bulgaria the ballet was produced by Lorca Massine for the first time on 12 May 1995, on the stage of the National Palace of Culture. In the role of Madame Hortense danced the well-known Bulgarian ballerina Masha Ilieva. About her Lorca Massine said that she was the best Madame Hortense, which he had ever seen so far. Since the ballet’s first production on the Stage of the Sofia Opera and Ballet have elapsed entire 24 years, but the audience has welcomed it since then till now with endless enthusiasm.

The spectacle has one interval and continues 2 hours.

Don’t miss “Zorba the Greek” at the Sofia Opera and Ballet!

Tweet
More in this category: « Matthew Scott Rogers will conduct “Madama Butterfly” at the Sofia Opera and Ballet (10 May, at 19:00 h) Increased interest in Tchaikovsky’s masterpiece “Eugene Onegin” at the Sofia Opera – impressio.dir.bg »
back to top