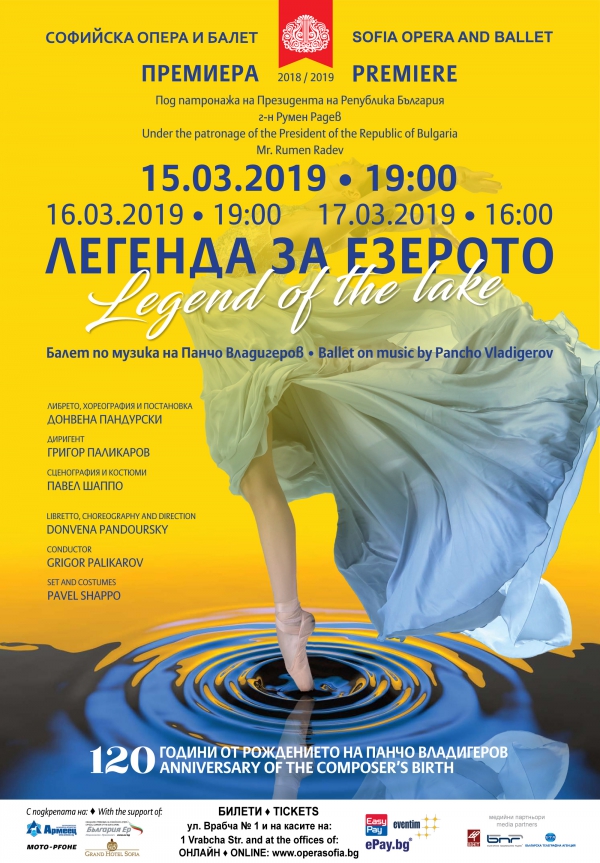 The Sofia Opera and Ballet will mark the 120th Anniversary of the classic of the Bulgarian musical culture Pancho Vladigerov (1899–1978) with the premiere of the ballet “A Legend of the Lake” on 15 March. The next premiere spectacles are on 16 and 17 March. The celebration of the great composer is under the patronage of the President of the Republic Mr. Rumen Radev. Sara-Nora Krysteva, Artistic Director of the ballet of our first opera theatre pointed out: “I am glad that such a beautiful Bulgarian ballet – colourful, with the participation of our entire ballet company, with wonderful music, has long since not been produced on our stage. From all celebrations in Bulgaria, dedicated to the genial Vladigerov, only Sofia Opera and Ballet will present a big, unique spectacle. Our ballet is working with a lot of enthusiasm with the choreographer Donvena Pandoursky, who is author of the libretto and producer of “A Legend of the Lake”.

Donvena Pandoursky herself shared: “With a lot of joy I accepted Academician Plamen Kartaloff’s invitation to create a new production of the ballet “A Legend of the Lake” at the Sofia Opera and Ballet. To come back in my home city, at the theatre, where I made my first professional steps and at that with such a wonderful and responsible task – a spectacle to Pancho Vladigerov’s infinitely rich music, dedicated to the 120th Anniversary of this great Bulgarian composer! The impression, the poetic spirit and the deep dramatism in combination with the kindling original dynamics of the asymmetric folklore measures provoked me to look for a contemporary interpretation of the work of art. And when after my long absence during the last years I came to get acquainted with the ballet company and I saw the wonderful young people, emanating the energy of our day, the story started to grow with accelerated rates before my eyes. A legend about the human being from the past, through the eyes of the present and forward looking to the future ... I hope through the mutual cooperation with all participants at the creation of this production to manage to reach to the heart of the audience and this way to pay the deserved respect to the composer Pancho Vladigerov.

In the ballet “A Legend of the Lake” comes to life the rich colourIng and poetic spirit of Pancho Vladigerov’s music. The action takes place in a fairy-tale time and at a fairy-tale place. Phantasy and reality interweave into a dramatical story about human being and nature, about love and hatred, peace and war. The new interpretation is seeking modern sounding of the eternal values of life.”

The ballet “A Legend of the Lake” was not produced at the Sofia Opera since 1962. Then choreographer was Nina Anisimova. Pandoursky’s production is new, the sets and the costumes are made by the artist Pavel Shappo.

Donvena Pandoursky’s last production at the Sofia Opera and Ballet was from 2006. We would like to remind a part of her biography:

Born in Sofia. She graduated from the State School of Choreography in 1978 and joined the Ballet of the Sofia Opera. She was dancing also in the Arabesque Ballet. In 1984, she enrolled at the Rimsky-Korsakov Conservatoire /St. Petersburg, Russia/ and she graduated in 1988 in “Ballet Directing”. Since 1989, she has been living and working in Germany. In the period 1989-1994, she worked as guest with the ballet companies: Stuttgart Ballet, Béjart Ballet, Ballet of the Deutsche Oper am Rhein – Düsseldorf, Ballet of the Pfalztheater – Kaiserslautern, Royal Swedish Ballet – Stockholm, Ballet of the Gothenburg Opera House – Sweden, London City Ballet, etc.

In 1994, she produced at the Sofia Opera “Tchaikovsky’s 6th Symphony” and “Concert, Op. 79” by Carl Maria von Weber. Since 1995, she has been living and working in Münster, Germany. In 2005, she produced at the Mariinsky Theatre, St. Petersburg – Russia, the ballet “The Magic Nut” /after Е.Т.А. Hoffmann/ – a superproduction with 262 characters and 72 students from the Vaganova Ballet Academy /designer Mihail Chemiakin/.

In 2006, with the participation of soloists from the Mariinsky Ballet she produced at the Sofia Opera “Prokofiev-Rachmaninoff-Stravinsky”. The same year, she produced at the Mariinsky Theatre “Metaphysics-The Meek One-Le sacre du printemps” under the baton of Maestro Valery Gergiev with designer Mihail Chemiakin. The production was nominated in two categories for St. Petersburg's highest theatre award – “Golden Soffit”.

She is author of ballet librettos and film scripts.

Our cultural circles are in expectation of the premiere of “A Legend of the Lake”, with which the Sofia Opera and Ballet will mark Pancho Vladigerov’s 120th Anniversary.

View the embedded image gallery online at:
https://www.operasofia.bg/en/news-and-events/item/7403-the-sofia-opera-and-ballet-is-celebrating-the-classic-pancho-vladigerov-with-the-ballet-a-legend-of-the-lake#sigProGalleria531b2df34f
More in this category: « The mezzo-soprano Diletta Scandiuzzi – winner at the Tiramisù World Cup The Sofia Opera and Ballet at an exhibition in Berlin »
back to top