SLOVENIAN BAND ‘KATALENA' WILL PERFORM AT SOFIA OPERA ON 1 JUNE 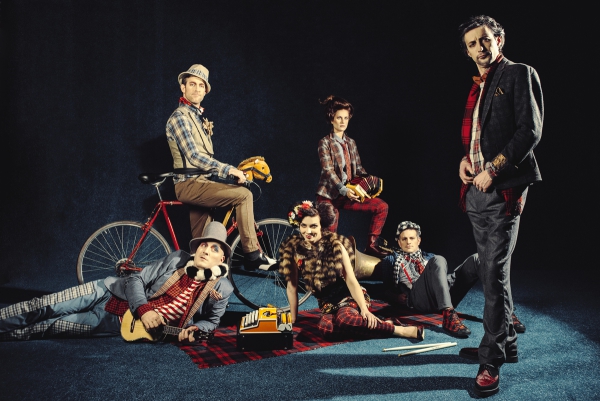 In the chapter of the contemporary Slovene popular music, Katalena needs to be addressed as no more and no less than a phenomenon.

The story of this urban band begins in an idyllic village in the Southeast of Slovenia, where, in the summer of 2001, a group of six enthusiasts unearthed archival folklore material and rejuvenated its rustic image in line with their art rock, funk, jazz and blues pedigree and with their own integral youthful vision that was as much philosophical as it was musical.

The feedback from those privileged enough to encounter with the six-some music in its prime, soon outgrew the original idea of a one off experiment and in the months and years to follow, sons and daughters of Katalena took the stages of the most prominent festivals, concert halls and clubs home and abroad by a storm. In sixteen years time the band gave birth to six brainchildren – (Z)godbe/Stories (2002), Babje leto/Indian summer (2004), Kmečka ohcet/Country wedding (2006), Cvik cvak! (2008), Noč čarovnic/Night of the Witches (2011) and Enci benci Katalenci (2015). Albums received great attention among music writers that are up to this day still unable to categorize them, turned the existing folkloristic theories upside down and converted a great number of doubting Thomases into folk music fans.

Combining best of the Slovene traditional music, carefully selected from the archives, songbooks and old vinyl records with solid rock rhythms, funky groove and enviable arranging skills it creates a unique post-folk rock style that presents the music legacy of Slovenia’s regions in an utterly new light. Fused with dynamic and invigorating electrical instruments, which caress the enchanting singing, it is transformed on the stage into a dance and sound performance that mesmerizes even the most musically pampered ears.

Katalena is the most inspirational voice of the 21st century Slovene folk music soundtrack.

A teen, who has played everywhere from New York to Tel Aviv, experienced all the major festivals, venues and club stages in Slovenia, danced Špic-Cvak! with Edward Clug and Valentina Turcu in a sold-out Gallusova hall (the most prominent cultural hall in Slovenia), sang with Resian grandmothers, with Neca Falk and Jani Kovačič,  ganged up with Svetlana Makarovič, and brought music out of Dane Zajc’s and Gregor Strniša’s work. Innovatively and sometimes with a dash of subversion, Katalena has played within the field of the traditional very maturely, desacralizing and deconstructing the national musical treasure and its ideological concepts that have been associated with it for almost 200 years. Katalena has been accomplishing this very successfully from the very start.

View the embedded image gallery online at:
https://www.operasofia.bg/en/component/k2/item/5638?event=0#sigProGalleria405992997b
More in this category: « CONCERT - 180 YEARS FROM THE BIRTH OF THE VASIL ZEVSKI CONCERT - MEDICAL UNIVERSITY »
back to top