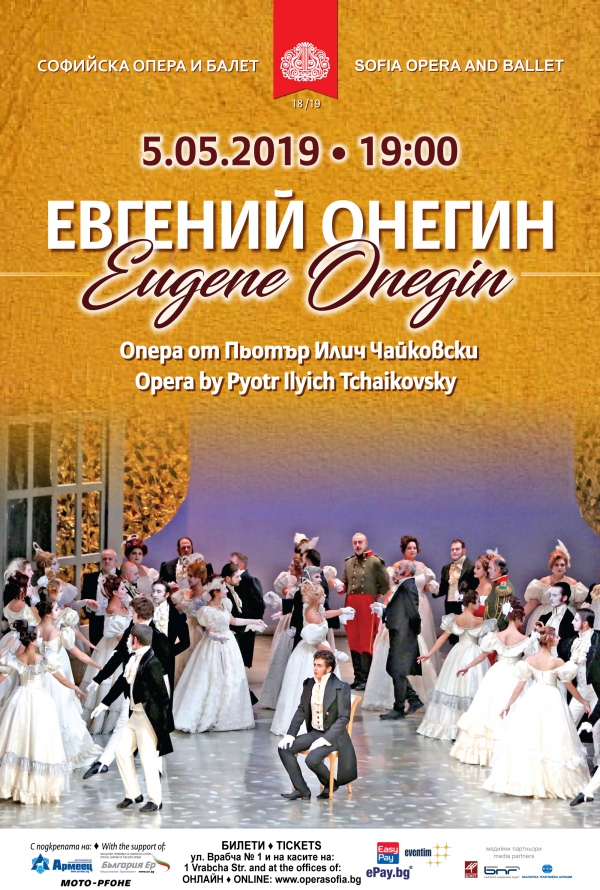 The widow Madame Larina lives lonely with her daughters, Tatyana and Olga, in her estate in the country. Celebrating the end of the harvest season the peasants form the estate bring to their landlady a wheat sheaf and sing songs. Olga’s fiancé, the young poet Lensky, pays a visit and brings along his friend, Eugene Onegin, who has been terribly bored in this remote part of the country. Tatyana, being a very romantic person, falls in love with Onegin at first sight.

The young girl is completely obsessed with her feelings for the interesting man. She is restless and decides to write a letter to her sweetheart. She tells him that she loves him and asks him to meet.

Tatyana waits anxiously Onegin in the garden. He arrives and politely but coldly explains to the young girl that he is unable to reciprocate her feelings. Onegin’s refusal completely crushes the tender girl.

A lot of guests arrive to Madame Larina’s estate for Tatyana’s name day. Monsieur Triquet, who is French, surrounded by the guests, sings some couplets dedicated to the girl celebrating her name day. Lenski again brings along Onegin who is bored even though attending the party.   In order to amuse himself and to irritate Lensky, Eugene starts wooing thoughtless Olga. Lensky who is in love, is indignant at his friend’s frivolous behaviour and at his fiancée’s vanity. He gets angry and makes accusations and offences against Onegin without controlling himself. A quarrel bursts forth.Driven to despair, Lensky throws his glove before Onegin. Those present try in vain to make peace between the friends. They both decide to fight a duel the following day.  Early in the morning Lensky arrives together with his seconds to the duel place. He thinks of Olga however. Onegin arrives with his manservant as a second. Both former friends are aware of the senselessness of this duel however their intense feeling of dignity and their mistaken pride won’t let them reconcile. The second Zaretsky gives them a signal, a shot rings out and Lensky falls dead.Following Lensky’s death Eugene goes abroad for a long time. After his arrival back to Petersburg he is invited to the ball at the house of his old friend, Prince Gremin. Onegin is taken aback when he recognises that Tatyana is Gremin’s wife. The Prince tells Onegin about his happy life and introduces his wife to Onegin. Tatyana coldly and distantly greets Onegin and immediately walks away. Only now Onegin realises what he has missed by disparagingly pushing her love away. For the first time in his life disdainful Eugene is seized by burning feelings and decides to by all means meet Tatyana.   The young lady is still in love with Onegin and is reading with agitation his letter. Onegin enters. Without waiting for her answer he approaches her and tells her about his love. Tatyana tells him about her sufferings however her answer to Onegin’s begging for forgiveness is that past will never come back. She will remain faithful to her husband. Desperate Onegin remains alone in this world …

View the embedded image gallery online at:
https://www.operasofia.bg/en/component/k2/item/2702-eugene-onegin#sigProGalleriae405186b48
Pictures by: SVETOSLAV NIKOLOV
More in this category: « NORMA WAGNER - MAGURA »
back to top