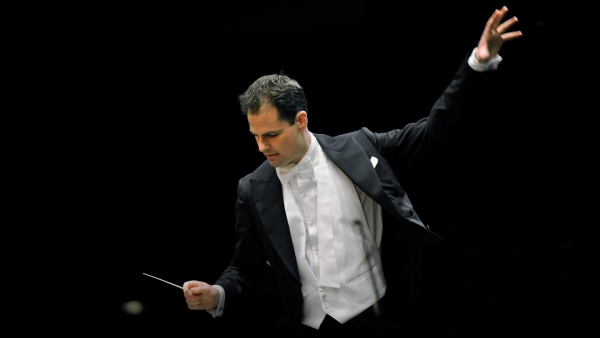 Constantin Trinks was born on 9 April 1975 in Karlsruhe, Germany.

The first musical experiences came with playing the piano and French horn. Also involved in different ensembles and choirs from an early age. In 1994, began to study conducting at the State Music Academy in Karlsruhe with Professor Wolf-Dieter Hauschild and piano with Professor Günter Reinhold. He graduated in 2000 with a first-class degree.

During his studies, Mr Trinks worked in 1996 as a repetiteur on Don Giovanni at the Aalto Theater Essen and at the Castle Festival in Zwingenberg in 1997. From 1997 to 2000, he was engaged at the Badisches Staatstheater in Karlsruhe as guest répétiteur and personal assistant to Maestro Kazushi Ono, working on numerous opera productions. It was here, in 1997, that he supervised choir rehearsals for Der junge Lord by Hans Werner Henze. Himself an enthusiastic tenor, Mr Trinks sang in the Kammerchor Stuttgart directed by Frieder Bernius from 1999 to 2001.

At the Schwetzingen Festival 1999 he assisted Thomas Hengelbrock – and Andreas Spering at the Händel Festival in Karlsruhe between 1998 and 2002. Mr Trinks also was an intern during Christian Thielemann’s production of Tannhäuser at the Bayreuth Festival in 2002. He was a scholarship holder by the “Akademie Musiktheater heute” from 2003 to 2005.

During this period, he also conducted many ballet performances as well as conceived and directed young people’s concerts – not to mention special concerts highlighting Mendelssohn’s Second Symphony Lobgesang in 2003 and Schumann’s Szenen aus Goethes Faust in 2004.

In his third season at the Staatstheater Saarbrücken, Mr Trinks presided over four new productions, one of which was the widely acclaimed premiere of Intolleranza 1960 in the Luigi Nono anniversary year of 2004. In 2005 appointed First “Kapellmeister” and Deputy Music Director. New productions of Don Carlo, La bohème and Don Giovanni; several performances of Elektra.

As Acting Music Director at the Saarlandisches Staatstheater Saarbriicken from 2006 to 2009, Mr Trinks conducted premieres of Das Rheingold, Lohengrin, Salome, Die Zauberflöte, Carmen, La traviata, Cavalleria rusticana, I pagliacci – and Kullervo by the Finnish composer Aulis Sallinen. The European premiere of the opera The First Emperor by Chinese composer Tan Dun met with great acclaim. He directed a youth dance project based on The Firebird in collaboration with choreographer Royston Maldoom.

In October 2008, Mr Trinks made his debut at the Staatstheater Darmstadt with the premiere of Die Meistersinger von Nürnberg. Has been Chief Music Director there since the 2009/2010 season.

Artistic collaboration with a series of other orchestras. Here a short overview ...

the Komische Oper Berlin, also the opening concert of the “International Anton Rubinstein Festival 2007” at the St Petersburg Philharmonia.

Japan debut in December 2008 at the New National Theatre Tolryo: a new production of Don Giovanni with an international cast. He will return there in 2012 for La bohème and in 2013 for Tannhäuser. Previously conducted Gustav Mahler’s Fifth Symphony with the Tokyo Philharmonic Orchestra in May 2010.

A successful debut at the Semperoper Dresden in March 2010 with Der Rosenkavalier. Further performances in late summer 2010. In the 2011/2012 season, Capriccio by Richard Strauss and Hänsel und Gretel – plus a new production of Schwanda the Bagpiper by Jaromír Weinberger.

Debut at the Opéra National de Paris towards the end of 2010, with a revival of The Bartered Bride.

Highly acclaimed debut at the Bayerische Staatsoper Munich during the Opernfestspiele 2011 with Der Rosenkavalier. Return to Munich with a series of performances of the same opera in 2011/12.

With Turandot debut at the Deutsche Oper Berlin in 2014.

Tweet
More in this category: « Константин Тринкс Sofia Opera and Ballet - Tristan undIsolde - Opera by Richard Wagner »
back to top