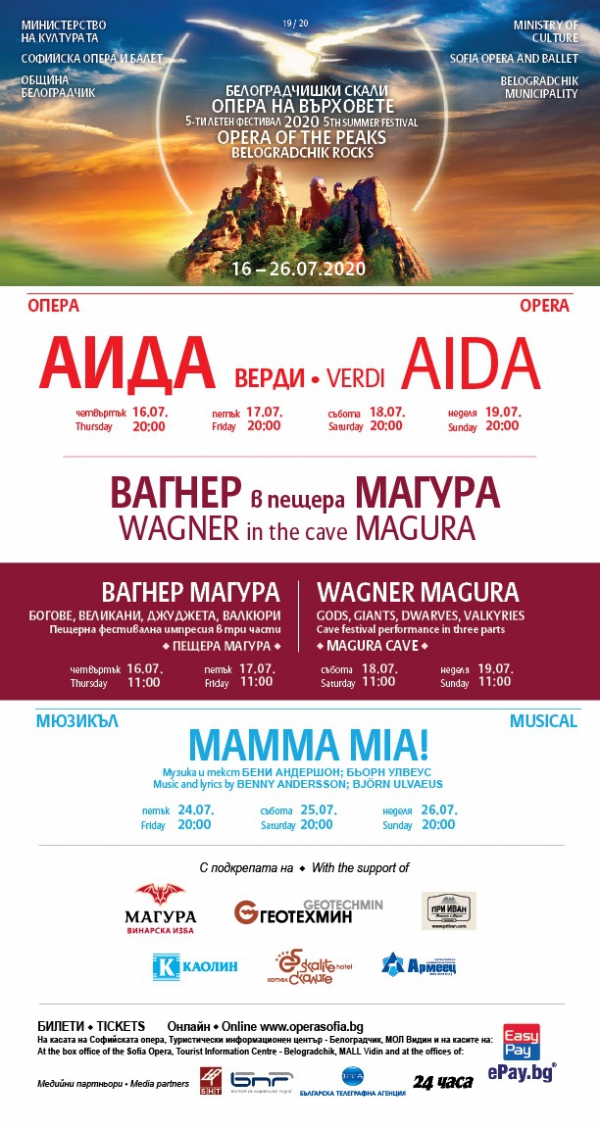 Together with the Italian Cultural Institute

Love vs. loyalty – which will prevail when all is at an impasse?

Aida, an Ethiopian princess enslaved in Egypt, is hopelessly infatuated with her conqueror Radamès. In the midst between the warring nations, she is faced with an impossible choice. Whether to betray Radamès in order to defend her homeland?

Or to surrender entirely to love?
“This opera is certainly not one of my worst” without any shred of false humility said Verdi at the European premiere of “Aida” at “La Scala” in 1872. Five years earlier, in 1867, the Parisian Grand Opera staged the premiere of “Don Carlos”. The work was very successful, but it left rather bad memories in Verdi because of the many problems of all kind prior to the performance.
There was, however, a particularly positive aspect, and it is Verdi’s acquaintance with Camille Du Locle, one of the librettists of “Don Carlos”. He and the eminent French historian and Egyptologist Auguste Mariette along with Antonio Ghislanzoni, well-known poet and
journalist, as well as Verdi himself, formed the nucleus that developed the idea coming from the parable of the

Ethiopian princess Aida, read from an ancient papyrus, to compiling the script, the texts in prose and poetry, and finally to the premiere on 24 December 1871 in the recently built opera house in Cairo.

Despite the copious correspondence between them, some significant moments in the genesis of the work roll in mystery. What is the role of Ismail pasha, the Khedive of Egypt? Should he get credit for the idea, since it was he who first heard about the story of Aida during one of his early military marches to Sudan? Were not his the repeated, while unsuccessful, attempts to convince Verdi to write an opera for the opening of the Suez Canal, and the opening of the opera in Cairo, built by Italian architects a year earlier?

Many deny his contribution to the creation of the opera by highlighting the fact that Du Locle, as director of the Opera Comique in Paris, had already done what was necessary to win Verdi for the cause of Aida, but justice demands that the contribution of Ismail pasha is recognised.

Paul Draneht, director of the opera house in Cairo, emphasizes on his selection of Verdi, thus counting him among the group of initiated. Indeed, he did invite Verdi to write a celebratory аnthem for the opening of the Cairo Opera; Verdi politely declined the offer, but along with the excuses unambiguously stated that writing “protocol” music is not his custom!

Among the involved we can include without hesitation Verdi’s wife, Giuseppina, the famous singers Teresa Stolz and Maria Waldmann, the conductor Franco Faccio, and of course Giulio Ricordi, the publisher of Verdi, one of his closest friends.

In the middle of 1870 Verdi began composing the work, and in the middle of December it was ready and the intense preparation for the premiere started. The Franco - Prussian War delayed the performance by six months, but in the meantime the work did not stop: the costumes were sewn at some of the most famous Parisian ateliers, the best workshops produced the sets, a new model of trumpets were specially designed and manufactured, known later as “Aida trumpets”, in A and B.

The correspondence between all involved, the transportation, the logistics in general at the level of communication at the time, gave surprising results.

This whole series of remarkable events and meetings from 1868 in Cairo, lead to the premiere in 1871, the culmination in Milan in 1872, to the “divine” zenith in 1880 at the Paris Opera, and the peaceful end of the work in the winter home of Verdi in Genoa in 1891, when he summed up the last page of this great opus.

Thomas Mann observed that some humans have an instinctive sense of their own longevity and, therefore, take more time for their achievements than their less fortunate fellows. Certainly Verdi had this sense, so that he could quietly consider his plans and ideas, to return to them, reconsider them, and even forget the sheet music for decades.

But did he have a sense of his own greatness?

Act One
Scene One

A hall in the palace of the Pharaoh in the capital of Egypt - Memphis. Ramfis tells Radames that the war with Ethiopia is inevitable. Radames hopes to be elected commander of the Egyptians. He longs to return from the battlefield victorious and to free his beloved - the slave Aida. Her father - the king of Ethiopia has invaded Egypt to free his daughter from slavery. Aida is in love with Radames.

Amneris comes. The Pharaoh’s daughter is also in love with the brave warrior. She suspects, however, that his heart belongs to another. When Aida appears Amneris notices that Radames is embarrassed. The Pharaoh comes with the high priest Ramfis. A messenger announces that the Ethiopians led by their king have invaded Egypt. The Pharaoh heralds the beginning of the war and Radames is chosen by the goddess Isis to lead the army.

Torn between her love for Radames and the loyalty to her people, Aida asks the gods to send her death.

In the temple. The High Priestess prays omnipresent god Ra to award victory to the Egyptian warriors. Ramfis, surrounded by priests, hands the sacred sword to Radames.

The chamber of Amneris. The Pharaoh’s daughter helped by her slaves prepares to meet Radames as victor. When Aida comes Amneris orders everyone to leave. To test the feelings of his slave, she says tells her that Radames died in battle. Aida is unable to withstand the test and admits her love for the young warrior. Burning with jealousy,

Radames and his warriors come triumphant in Thebes.

The Pharaoh of Egypt announced that Radames can ask whatever prize he wishes for the victory. The Ethiopian prisoners come and Amonasro is among them. Aida immediately rushes to her father, but he does not disclose his identity. They ask the King for mercy.

The people, however, want their death. Radames is in favour of the prisoners. The Pharaoh declares him his successor and offers him his daughter’s hand.

On the banks of the Nile, near the Temple of Isis. Aida is waiting for Radames, according to their secret arrangement. Amonasro suddenly appears and asks his daughter to learn from her beloved the location of the Egyptian army. Aida refuses and Amonasro curses her. Radames comes. Torn by conflicting emotions, the Ethiopian princess asks him that they flee together. The young warrior refuses, but mentions the secret place where his troops will pass. Amonasro comes out of hiding and reveals his name. In horror Radames realizes that he has inadvertently turned traitor. The cries attract the attention of Ramfis and Amneris. They order the guards to capture Radames. Aida and her father manage to escape.

A hall in the temple, in front of the vault. Amneris offers Radames to renounce his love for Aida in exchange for
his freedom. The brave warrior does not want salvation at such price. Ramfis comes out of the vault and reports the verdict: the traitor shall be buried alive. In a fit of desperation, Amneris curses the cruel priests.

The entrance to the vault of the tomb is sealed up. Radames remembers the happy moments with Aida. Suddenly the Ethiopian princess appears from the darkness. She has crept in unnoticed to share the fate of her lover. Above, in the temple, the mourning Amneris bitterly laments her lost love.

View the embedded image gallery online at:
https://www.operasofia.bg/en/component/k2/item/120-aida#sigProGalleria16c5d0387b
More in this category: « DON CARLO TURANDOT »
back to top