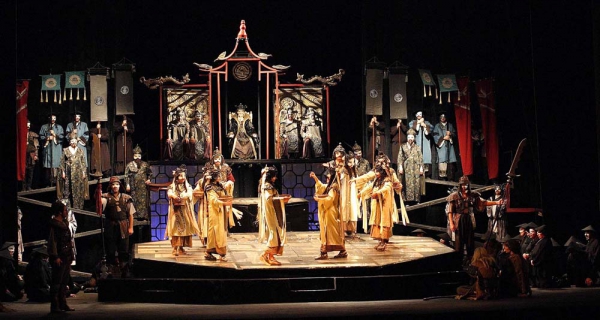 At sunset. A square in Peking. The mandarin announces before the crowd that Turandot, the daughter of the Emperor Altoum, will marry the one who answers the three riddles asked by her. If he fails, he will be beheaded. The crowd is agitated and requests the successive victim – a Persian prince – to be immediately beheaded. Among the crowd is also Timur, the deposed King of Tartary, accompanied by his slave-girl Liù. In his face, Calaf, the prince who was forced to hide his name, recognizes his father. There comes the executioner together with his men. As soon as the moon appears, will begin the execution impatiently expected. The youth of the Prince of Persia awakes the sympathy and the crowd is calling on Turandot – Have pity on him! Have pity on him! And the malediction freezes on Calaf’s lips, when he sees the princess sparkling in her imperious and almost unreal beauty. Neglecting the warnings of the ministers, Ping, Pang and Pong and Liù’s supplications, Calaf decides to attempt the riddles.

Ping, Pang and Pong lament the fate of China because many innocent people have died and continue to die on Turandot’s will. They dream of their homelands and the life far away from the palace. Their great wish is that princess Turandot could fall in love. The announcement of the beginning of the trial gets them back to the cruel reality in Peking. The crowd has filled in the square in front of the palace. The Emperor sits on his throne surrounded by the wise men holding in their hands rolls with the answers of the riddles. The Emperor tries to make Calaf change his mind, and Turandot tells that through her trial she gets revenge for the ravishment and the murder of a Chinese princess. But Calaf is adamant. The answer of the first riddle he guesses without any hesitation – that’s hope! Then follows the second one – blood! Furious, Turandot asks the third riddle – What is like ice, but burns like fire and can at the same time make you king and slave? Calaf again replies correctly – this is Turandot herself. The defeated princess supplicates the emperor not to let her daughter become the slave of a foreigner, but Altoum answers her that he cannot break his word of honour. Calaf doesn’t want to marry without being loved and decides to die under one condition – before sunrise Turandot must guess his name. The crowd cheers for the victor and for its wise emperor.

Night. The voices of the shouting heralds can be herd – This night, none shall sleep in Peking. Ping, Pang and Pong are trying to tempe Calaf to reveal his name to them. Liù and Timur are caught because they were seen together with the prince. The girl-slave who has been hiding her love for Calaf for a long time now, kills herself because she feared she could disclose his name. This fact moves Turandot deeply, but her real transformation happens in Calaf’s arms. She already knows his name: it is LOVE!